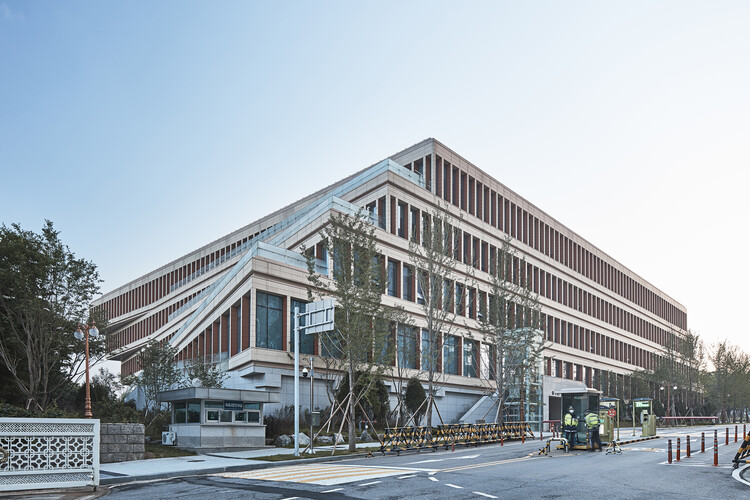 Text description provided by the architects. Making a flexible place for the public purpose: The National Assembly Communication Building to be built in the National Assembly of South Korea area, the cradle of Korean democracy had to be planned as an open place reflecting the pluralistic democratic ideology while embracing the order of the existing components. And, the function of the building to be used by user groups would require not only systematic security systems but also spatial flexibility and expandability. Thus, Haeahn Architecture aimed to build “a flexible building containing open places” where daily life of the public would naturally take place, in addition to the formal monumental nature of the National Assembly area. Implementing a green space open to a flexible area: The site for the project was a green space surrounded by lush trees, about 10~12 meters in height on average.

Reflecting such a status, Haeahn Architecture established a green space open to the public and aimed to make the building familiar and low enough, ensuring the height would not exceed four stories to be buried among green trees. The rooftop of the low building would be also a green zone, connecting the flow of the nature, and the trace of “a forest,” formerly used as a green belt for many years, would be left along with the zelkova trees, which were as old as the history of the National Assembly Building. That way, the monumental landscape of the National Assembly area would be well conserved.

Creating a systematic space through flexible layers: In consideration of the characteristics of the building where various functions and users coexisted, Haeahn Architecture aimed to increase spatial usability and work efficiency while maintaining the independence of each facility by distributing functions per floor through a horizontal zoning plan. The four cores surrounding the atrium would provide a traffic flow system by user and a security system by facility. In addition, by applying an optimized structural modular system to the integrated work space composition, Haeahn Architecture composed functional space and work space that are to respond flexibly in accordance with the changing demand for space in the future.

Making a space of communication with flexible crevices: Haeahn Architecture paid attention to the building that spoke for pluralistic democracy, for the building embraced multiple functions for the public, press, parliamentary politics and administration; therefore, Haeahn Architecture completed a spatial identity under the spatial theme of the building “Encounter and Communicate” so that user groups would build sound democracy and the national vision through mutual cooperation and dialogue.

Various spaces designed for encounters and communication were allocated in many locations in the building, and common spaces and rest areas between each functional space would be continuously connected to the building, both indoor and outdoor. Such spaces were designed as the place of relaxation and sharing, as they allowed communication between people and people, the space and the space and the nature and the city, making the new building an open space where lively communication would always take place.