U.S. equity markets finished broadly lower on the first week of 2022 while Treasury yields climbed to the highest level since the start of the pandemic amid a sharp ‘reopening rotation’ from growth into value. Employment data this week showed that despite the record surge in COVID cases and hospitalizations, the U.S. economy showed only modest signs of cooling in recent weeks, keeping the Federal Reserve on course to take a more ‘hawkish’ approach to begin hiking interest rates as soon as March. 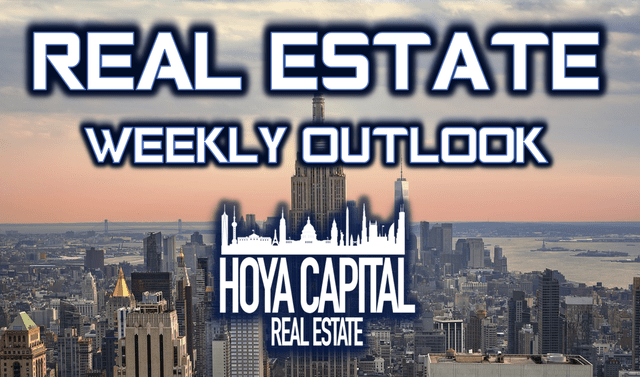 Ending the week on a four-day skid after eclipsing record-highs on Monday, the S&P 500 (SPY) declined 1.9% on the week while the tech-heavy Nasdaq 100 (QQQ) plunged 4.5%, its worst week in nearly a year. After posting the strongest gains of any asset class in 2021, real estate equities had a rough start to 2022, but COVID-sensitive property sectors including office, hotels, and mortgage REITs delivered robust gains. The Equity REIT Index advanced slid 4.3% on the week – its worst week since October 2020 – but the Mortgage REIT Index posted gains of nearly 4%. 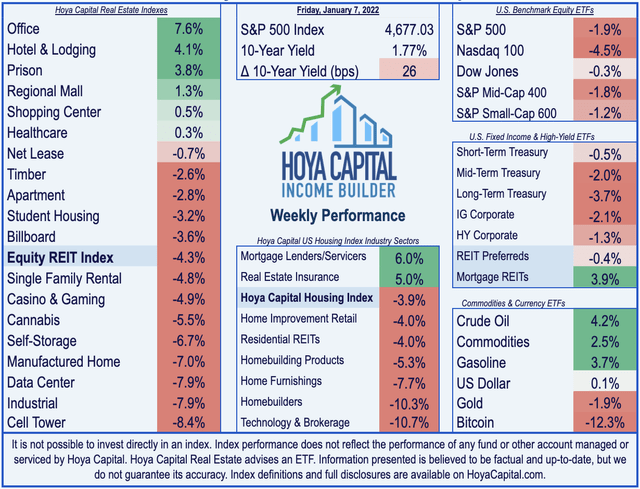 Minutes from the Federal Reserve’s December meeting suggested that interest rate hikes may come as soon as the March meeting – sooner than the market had anticipated – sending the 10-Year Treasury Yield to the highest level since before the pandemic in January 2020. Patterns among the GICS equity sectors were consistent with the classic ‘reopening trade’ as the Energy (XLE) sector soared more than 10% while interest-rate-sensitive sectors including Technology (XLK) and Real Estate (XLRE) were under pressure. Underscoring the somewhat peculiar market action this past week, homebuilders dived into ‘correction-territory’ with several major builders now trading with mid-single-digit P/E ratios despite double-digit growth rates expected over the next several years. 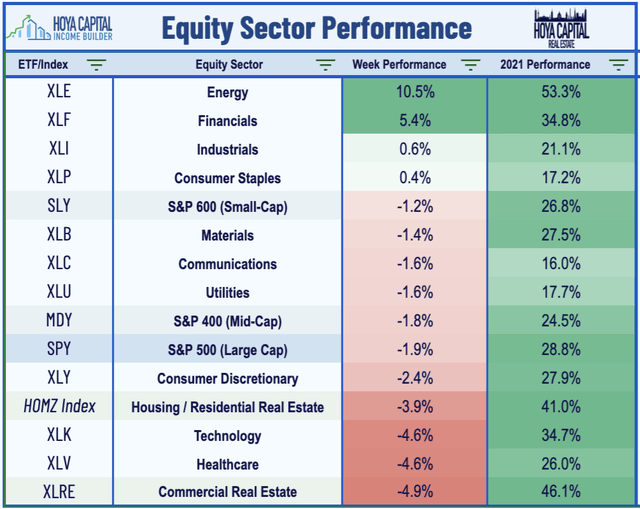 Below, we recap the most important macroeconomic data points over this past week affecting the residential and commercial real estate marketplace. 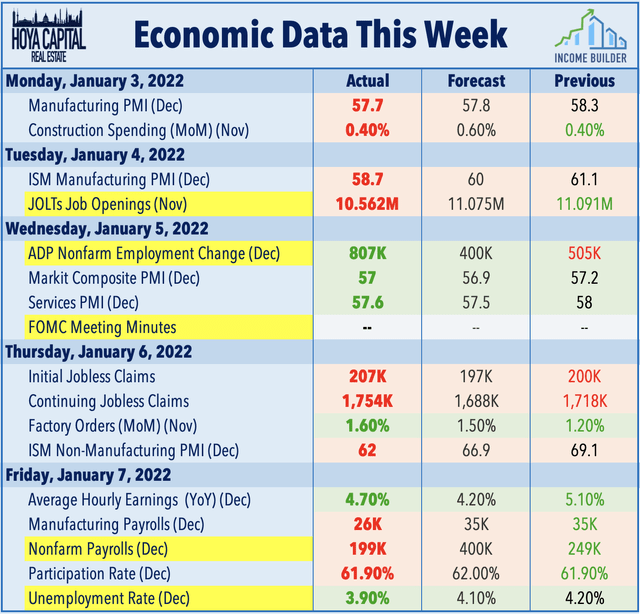 Following a weaker-than-expected nonfarm payrolls report in the prior month, the Bureau of Labor Statistics reported this week that the U.S. economy added just 199k jobs in December – well below the consensus expectations of 400k. The prior two months were revised higher by a combined 141k, however, and the relatively weak “headline” number followed better-than-expected ADP Payrolls report data earlier in the week and a continuation of solid trends in Jobless Claims data. Nonfarm employment has increased by 18.8 million since April 2020 but is down by 3.6 million, or 2.3%, from its pre-pandemic level. 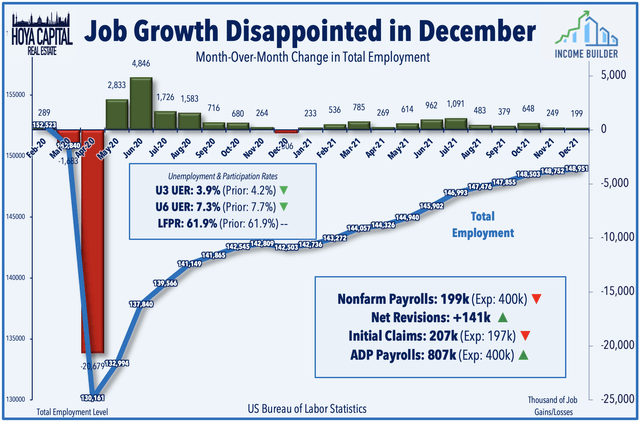 The labor force participation rate remains stubbornly depressed and was unchanged at 61.9% in December, which is 1.5 percentage points lower than the pre-pandemic level in February 2020. The employment-population ratio increased by 0.2 percentage points to 59.5% in December but is 1.7 percentage points below its February 2020 level. A critical question to determine the path of inflation and interest rates relates to how much “slack” remains in the labor market and what it will take to pull the millions of workers that departed the labor force during the pandemic back into the fold. 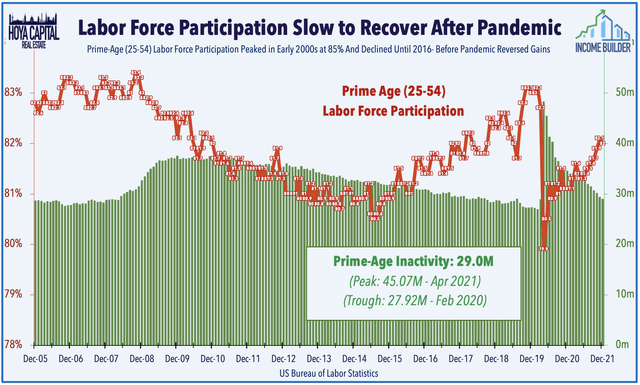 Diving deeper into the data, we note that in December, employment continued to trend up in leisure and hospitality, in professional and business services, in manufacturing, in construction, and in transportation and warehousing, but retail trade remains a source of weakness despite the record year for retail sales in 2021 and strong holiday spending trends. Healthcare hiring remains depressed despite a historic shortage of nursing staff reported by hospitals and residential care facilities. Speaking of shortages, construction hiring has been a source of relative strength over the past several quarters, driven by home construction activity across the multifamily and single family housing sectors as housing supply levels reached historic lows in late 2021. 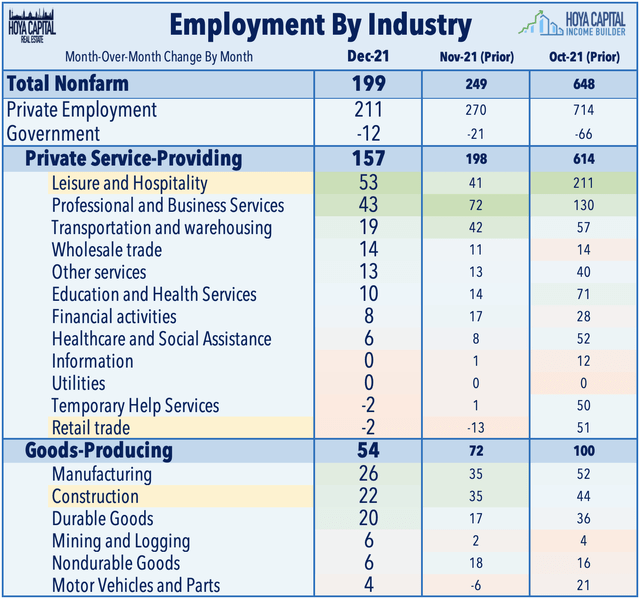 Storage: Emblematic of a week that saw a sharp rotation from growth to value within the REIT sector, Life Storage (LSI) declined more than 9% on the week despite becoming the first REIT to raise its dividend this year following a historic wave of over 130 REIT dividend increases in 2021. LSI declared a $1.00/share quarterly dividend, a 16.3% increase from its prior dividend of $0.86, representing a forward yield of 2.73%. Storage REITs stumbled into the pandemic with challenged fundamentals and an outlook for near-zero growth amid oversupply challenges. Catalyzed by the suburban housing boom, self-storage demand is suddenly insatiable. 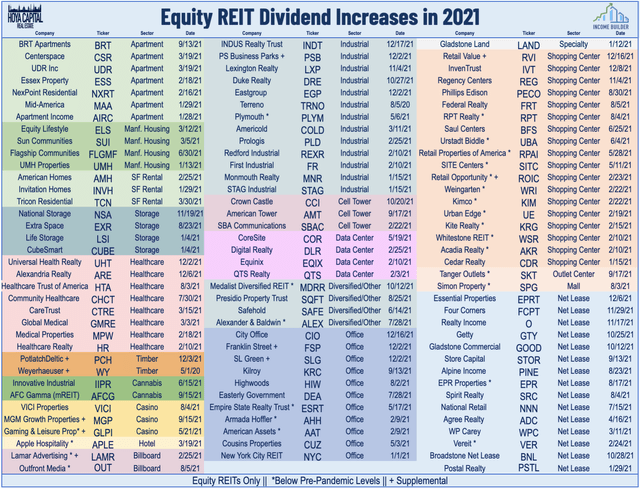 Cell Tower: Crown Castle (CCI) declined nearly 7% despite announcing a 12-year agreement with T-Mobile (TMUS) allowing increased access to CCI’s towers and small cell locations to build out its nationwide 5G network. Cell Tower REITs and carriers – specifically Verizon (VZ) and AT&T (T) – have been in focus over the last week amid a regulatory battle over the deployment of 5G networks using C-band frequencies, which the airline industry alleges interfere with airplane equipment using similar frequencies. We discussed these potential headwinds for CCI, American Tower (AMT), and SBA Communications (SBAC) in a report last week – Living On The Edge. 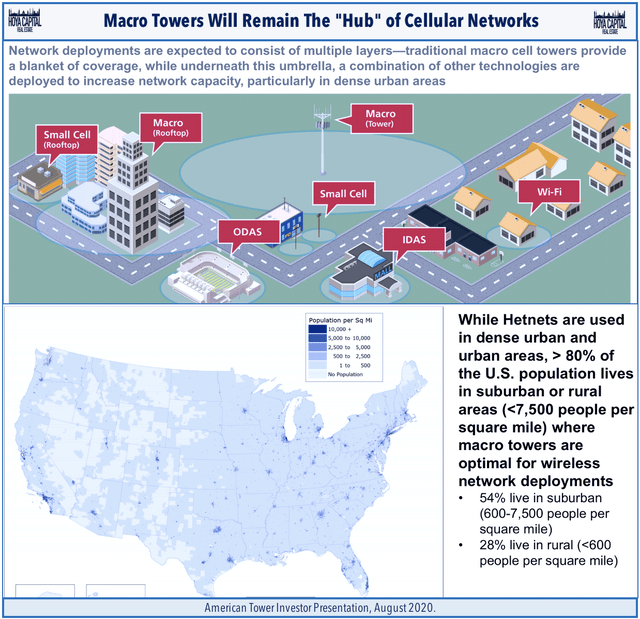 Industrial: Rexford (REXR) dipped more than 7% despite announcing an acquisition of eight properties in Southern California for $270M, bringing its full-year acquisition total to $1.9B. LXP Industrial (LXP) dipped nearly 8% despite announcing a new joint venture to which it sold a 22-property portfolio for a total gross valuation of $550M. LXP will retain a 20% interest in the new joint venture. Terreno (TRNO) also slumped despite announcing that it achieved a 34.4% increase in cash rents on new and renewed leases in Q4 and a 28.4% increase for the full year. As discussed in our recent Industrial REIT report, demand for logistic-focused industrial assets from both tenants and investors remains absolutely insatiable. 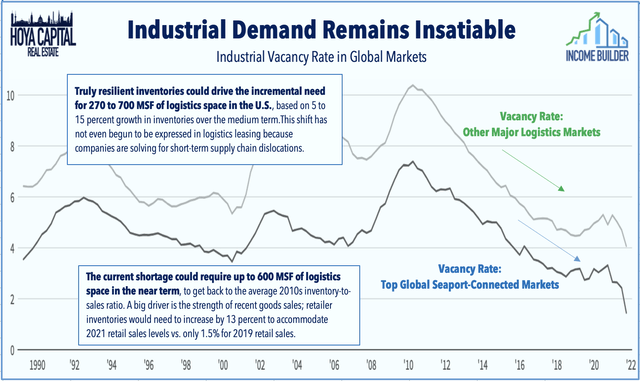 Manufactured Housing: The best-performing REIT sector of the past decade was also in the cross-hairs of the value rotation trade this past week as Equity LifeStyle (ELS) and Sun Communities (SUI) each pulled back by more than 6%. This week, we published Don’t Mess With The Best which discussed the favorable fundamentals of robust rent growth and limited housing supply. MH REITs edged out the REIT Index on the final day of 2021 to push their remarkable streak of outperformance to nine years, the longest of the Modern REIT Era. The secular tailwinds resulting from the intensifying affordable housing shortage should persist into the back half of the 2020s, if not longer. Of note, while not quite at that level yet, MH REITs have only dipped into “correction” territory (10% decline from highs) three times in the past decade. 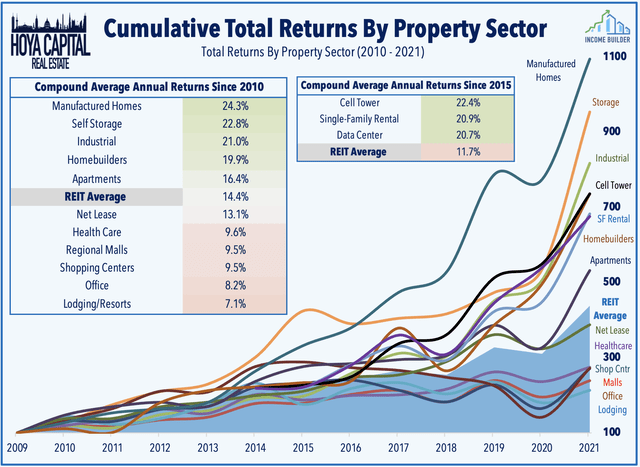 Office: Leading the charge this week with gains of nearly 8%, office REITs rallied even as the long-delayed ‘return to the office’ has been postponed yet again by several major corporations amid the recent Omicron wave. As discussed in Always Sunnier in the Sunbelt, office utilization rates have recovered only a fraction of pre-COVID levels in dense coastal “shutdown cities” with longer transit-heavy commutes but the outlook has brightened in recent months for business-friendly Sunbelt regions – following solid earnings results, favorable leasing trends, and strong comparable pricing. Empire State Realty Trust (ESRT) gained more than 15% after providing a business update in which it announced $307M in NYC multifamily acquisitions. 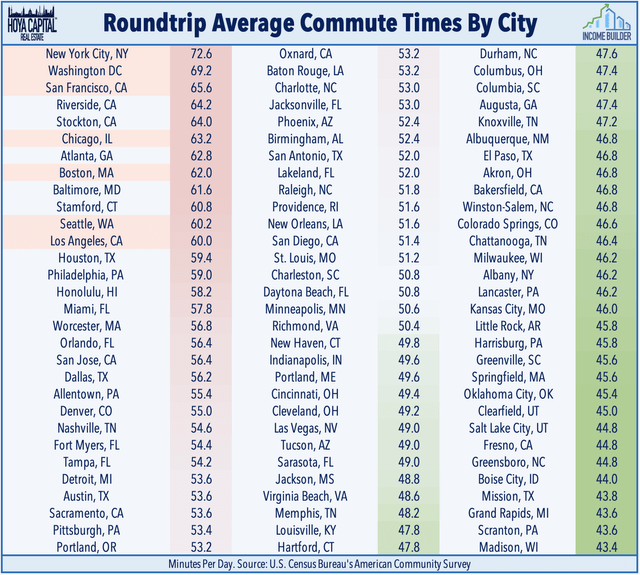 Apartments: On that point, two office-turned-multifamily REITs Veris Residential (VRE) and Washington REIT (WRE) delivered strong gains as well this past week as fresh data showed that rents continue to soar across the nation. A new report from RealPage showed that apartment demand soared in 2021 to the highest levels on record with net demand totaling more than 673k units – “obliterating” the previous high set in 2000 by a remarkable 66%. Strong demand drove apartment occupancy higher by 2.1 basis points year-over-year to 97.5% and both the increase and the resulting occupancy rate were the highest on record. Remarkably, occupancy rates hit or top 96% in 148 of the nation’s 150 largest metro areas. 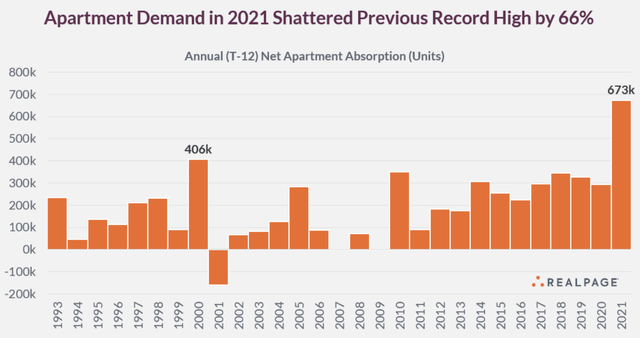 Net Lease: Also on the upside this past week, NETSTREIT (NTST) gained 1% after it initiated 2022 FFO guidance at $1.13-$1.17 per share, which would represent a 22% rise from its current 2021 FFO outlook, citing “strong momentum on both the investment and capital fronts.” Agree Realty (ADC) slipped 3% on the week despite boosting its 2022 acquisition guidance and announcing a record acquisition total in 2021 of $1.43B. ADC’s new acquisition guidance calls for $1.1B-1.3B of retail net lease properties in 2022. Elsewhere, Alpine Income (PINE) was flat after providing a business update in which it announced that its acquisitions totaled $260.3M in 2021 as net lease REITs are likely to report the strongest year of acquisitions since 2014. 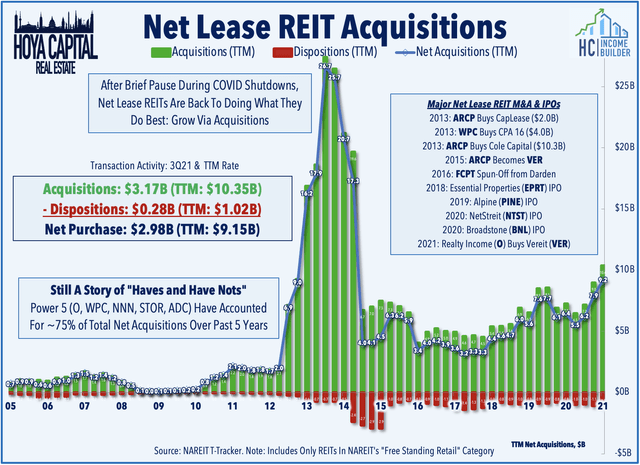 Cannabis: Innovative Industrial (IIPR) – still the best-performing REIT since the start of 2019 – dipped more than 15% on the week while fellow cannabis REIT AFC Gamma (AFCG) dipped nearly 12%. Both REITs were active in the capital markets as IIPR announced that it exchanged outstanding notes for stock in a $110M private transaction while AFCG announced a secondary common stock offering of 3M shares at $20.50/share for expected gross proceeds of $61.5M while also providing a business update in which it noted that it closed on $127M in new loans in Q4, bringing the full-year total to $341M. As discussed in When They Go Low, We Get High, Cannabis REITs are far-and-away the best-performing REIT sector of the past half-decade as the budding industry thrives in the murky and often contradictory regulatory framework of legalized marijuana. 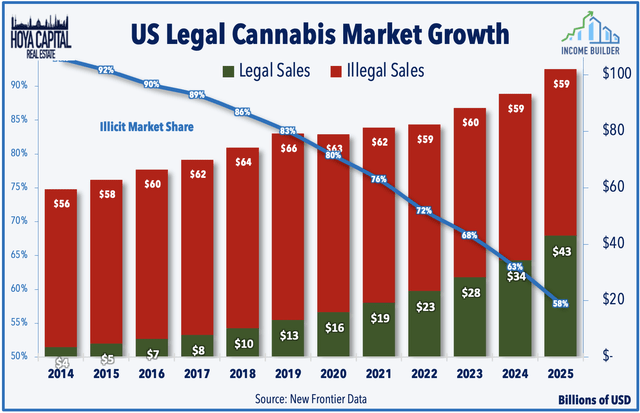 Healthcare: This past week, we published a Healthcare REITs: Choppy Road To Recovery which discussed our updated outlook and top picks within the healthcare REIT sector. After a vaccine-driven revival, Healthcare REITs were the weakest-performing property sector in 2021 as the promising recovery in the Skilled Nursing and Senior Housing was slowed by the COVID reacceleration. Staffing shortages remain critical issues at skilled nursing and senior housing facilities, a trend that continued in this week’s payrolls report, pressuring not only operating margins but also forcing some facilities to turn-away business. SNF REITs were among the leaders this past week, however, with Omega Healthcare (OHI) and Sabra (SBRA) each gaining 6%. 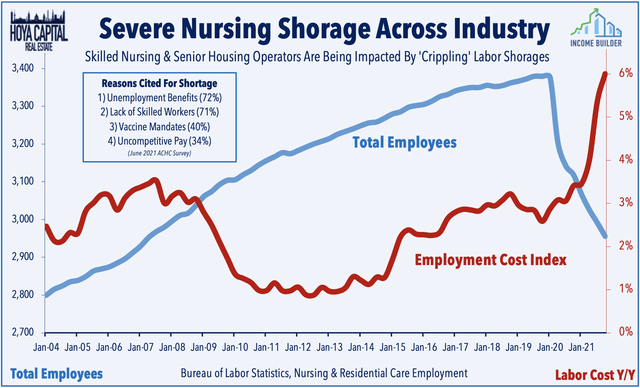 Mortgage REITs were broadly higher on the week as the yield curve widened with residential mREITs gaining 2.0% while commercial mREITs advanced 1.3%. For 2021, the Mortgage REIT Index delivered price returns of 7.0% and total returns of 16.0%. TPG RE Finance (TRTX) was among the leaders on the week after announcing that it completed total loan originations of $1.9B in 2021 and $651.6M in Q4 with new loan investments for 2021 were concentrated in multifamily and life science. Apollo Commercial (ARI) was also among the leaders after announcing that it originated $1.7B of mortgages in 4Q21 which takes annual loan originations to $3.2B for the year. 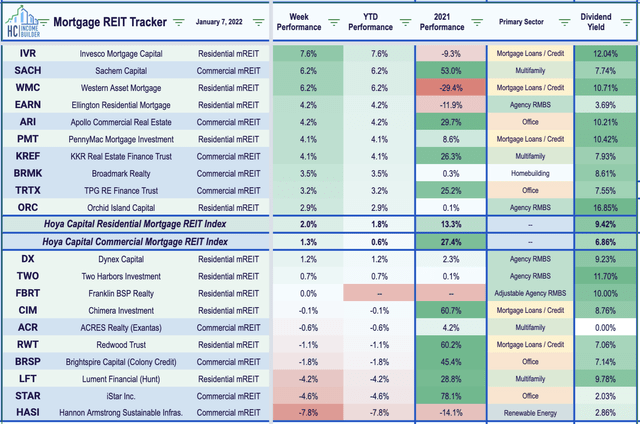 REIT Preferred stocks slipped 0.45% this week, on average, after ending 2021 with price returns of roughly 8.0% and total returns of roughly 14%. This week, Public Storage (PSA) launched a new preferred stock offering, a 4.10% Series S Cumulative Preferred Stock, raising $250M in gross proceeds. Also this week, KKR Real Estate (KREF) announced that it will launch a public offering of additional shares of its 6.50% Series A Cumulative Redeemable Preferred Stock (OTCPK:KREFP). There are now 165 REIT-issued exchange-listed preferred securities with an average current yield of 5.99% and 12 REIT-issued exchange-listed debt securities with an average current yield of 6.57%. 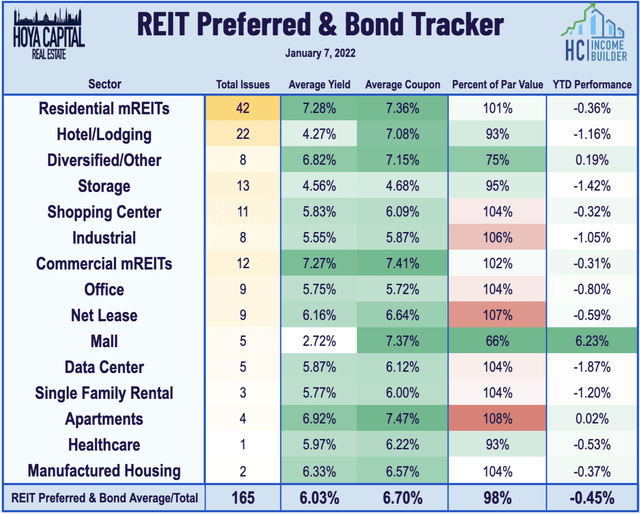 REITs were busy on the capital raising front this week. Mall REIT Simon Property (SPG) was among the leaders after it launched a $1.2B bond offering comprised of $500M of floating-rate notes due 2024 and $700M of 2.650% notes due 2032. Elsewhere, Digital Realty (DLR) priced an offering of €750M of 1.375% guaranteed notes due 2032, using the proceeds to redeem all of its outstanding 4.750% Notes due 2025. Alexandria Real Estate (ARE) slumped 6% after it launched a secondary common equity offering of 7M shares at $210/share. Armada Hoffler (AHH) was among the weaker-performing office REITs on the week after launching a secondary common stock offering of 3.5M shares at $14.74 for gross proceeds of $52M. 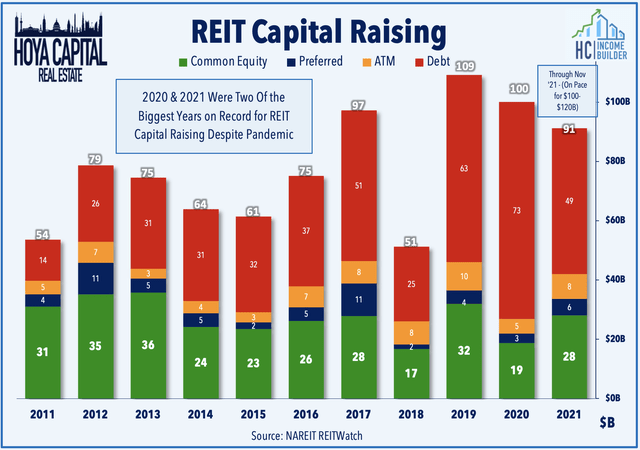 Economic Calendar In The Week Ahead 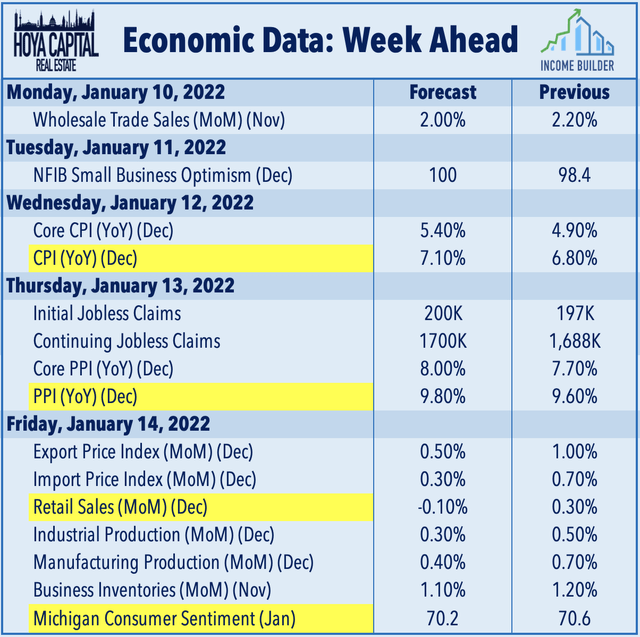 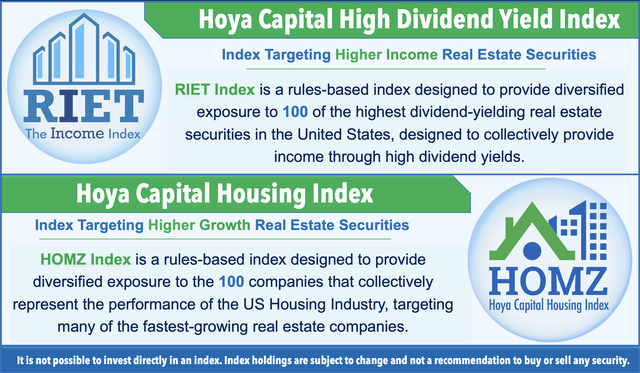