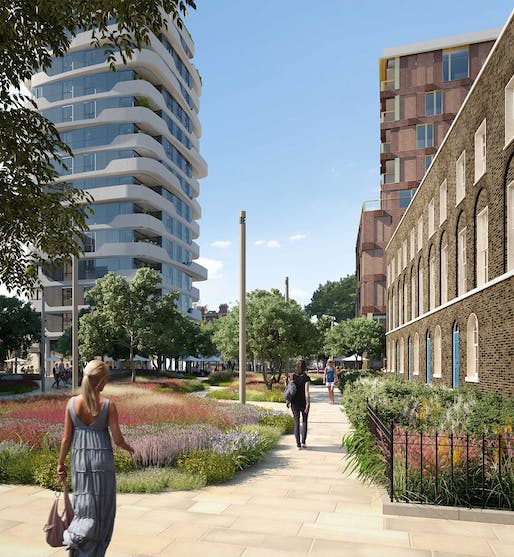 PLP masterplanned the development and designed seven buildings, while Adjaye Associates designed five of the six buildings on the west of the site. The duo first submitted plans for the estate in 2015, which were rejected by Tower Hamlets Council but later approved on appeal.
— Architects’ Journal UK


The revised plan was finally approved after an affordable housing plot was relocated “to a better setting” outside of the scheme, which also is now serviced by more energy-efficient heat pump technology.  One-third of the scheme’s now 529 residences are still considered affordable under the approved update.

Adjaye Associates are continuing on a banner year in the face of a recent UK High Court decision to halt the planned Holocaust Memorial in London. The firm has been named to several major development projects internationally in the past six months, including a mass timber design for the Toronto Quayside project and Cleveland’s plan to create an entirely new mixed-use district called the Cuyahoga Riverfront.