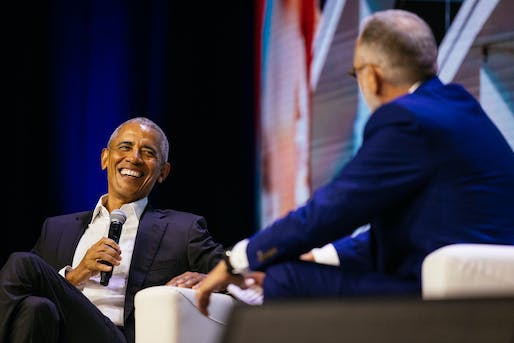 Barack Obama was greeted by a packed house at the close of the Friday session of this year’s A’22 Conference in his adopted hometown of Chicago.

Speaking to the capacity audience in a Q&A hosted by new AIA President Dan Hart, the two-term former U.S. President used his platform to touch upon the crisis of available affordable housing in America.

“Chicago is a case study of times architecture reinforced inequity,” he said, echoing long-held criticism of the city advanced recently by filmmaker Jordan Peele and documented by other observers of the city for a period of decades. Obama then spoke about the role government can play in aiding the delivery of more affordable units to the residential market, claiming that, in some cases, left-leaning policymakers are to blame for the predicament facing a number of states and municipalities.

“Good planning and skilled architects are needed, but this is where government policy makes a difference,” he said. “Sprawl in America isn’t good for our climate, so we have to think about how we create a liveable density that allows us to take mass transit and allows us to take bicycles and foot traffic. It’s not just lack of funding for affordable housing, frankly some very well-intentioned laws and regulations at the local level, often generated from the left and my own party, sometimes are inhibiting the creation of affordable housing and empowering NIMBY attitudes that make it very difficult to integrate communities.”

“When I was young, I was interested in architecture as a possible profession… My love for architecture has never gone away,” President Obama shares with #A22Con attendees. pic.twitter.com/GV8Eb6oqLJ
— AIA National (@AIANational) June 25, 2022

Obama also apparently made tacit endorsement of architectural labor unions before mentioning his own school-aged desire to pursue a career in the industry as well as the urgency of working with the public in a collaborative way, no matter the job function or professional field.

“The single most important thing I learned and carried through my entire career is listening to people. Turns out you don’t learn that much talking, but you do learn a lot listening,” Obama said. “If people feel as if you’re actively listening and care about their stories and lives, they will tell you what’s important to them and who they are. That applies to every profession, including architecture. The gesture of interest that can then inform design is something that anyone can do.”