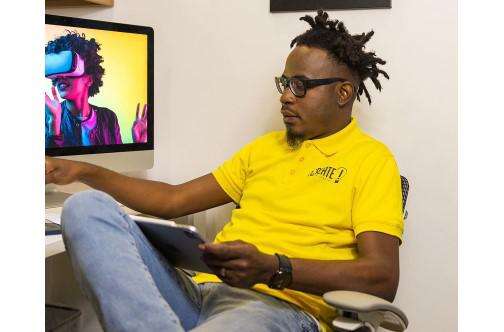 iCreate Prsident and CEO Tyrone Wilson is planning an acquisition and rights issue this year.

CHIEF executive officer of iCreate Limited Tyrone Wilson has shared that the Jamaica Stock Exchange (JSE) listed company is currently pursuing an aggressive merger and acquisition strategy with the aim of diversifying its income streams.

Over the last couple of weeks the company has disclosed its acquisition of majority stakes in Corporate Area-based GetPaid and a real estate development in the parish of St Ann.

Though tight-lipped on the financing of both acquisitions, Wilson told the Jamaica Observer that details will soon be available in the company’s 2022 financial report. He also revealed that iCreate now has a 51 per cent stake in the real estate project in St Ann.

Commenting on the company’s merger and acquisition strategy, the CEO said, “It gives us an opportunity to build cash flow for iCreate and profits over the short term because as a business, you’ve seen the losses we made in the past and we needed to improve our balance sheet.”

For financial year 2020, the company recorded a comprehensive loss of $22 million, against a backdrop of earning revenues totalling $58.38 million.

During that year, which was marked by the onset of the novel coronavirus pandemic, the company scaled back its core operation, iCreate Institute, including shuttering its Montego Bay office, to curtail operational expenses.

Wilson explained to the Business Observer that while the training facility provides online learning experiences, it had to discontinue courses that require hands-on and in-person interaction in keeping with measures to contain the spread of the virus. But the pandemic also presented an opportunity for the company to reflect and refocus on its mission of fuelling the digital and creative industries.

“So COVID-19 accelerated our plans [as] it gave us a case study on how big of an opportunity it is to bringing businesses into the digital future,” he shared.

Back in January, Wilson informed shareholders of the creation of iCreate Opportunity Ventures Division as part of an aggresive merger and acquisition strategy. At that time he also disclosed plans to acquire an advertising agency and the building out of the Creative City project.

In addition, he revealed plans to finalise the acquisition of GetPaid’s predecessor, Mobile EDGE Solutions, as part of “2-1 Investment Strategy”geared toward delivering US$2 million in revenue and US$1 million in profits for FY2022.

While Wilson remains adamant that the iCreate Institute will be the core of the business, and has his sights set on expanding throughout Latin America and the Caribbean, he also believes that the business of “education is really a dynamic model and it provides opportunities”. Pointing to The University of the West Indies and University of the Commonwealth Caribbean, he noted that schools can and have explored investment opportunities outside the classroom, and that iCreate was following that model.

“The pandemic has changed a lot for us and we see the need to diversify our path to profitability,” Wilson said, when announcing iCreate’s acquisition of majority stake in the St Ann Development.

“This project will significantly boost near-term cash flows and profitability while we build on our core business and other long-term income streams,” he added.

Wilson explained that the development will take precedence over the previously announced Creative City in New Kingston which fell through. However, it will allow iCreate to have a foothold in the real estate market and allow iCreate Opportunity Ventures to develop “a track record in investments”.

With regard to the acquisition of GetPaid, the CEO told the Business Observer, “We’ve always had an interest in e-commerce because of what it can do to power businesses and their continuous need for digital training to build on that… So we moved right on it because we think the synergies between iCreate and GetPaid are obvious and we can scale up that business very quickly, especially around training and capacity building for team members through iCreate programmes.”

Whereas GetPaid assists companies with setting up e-commerce websites, iCreate provides training in e-commerce and helps businesses with digital transformation under the Development Bank of Jamaica’s BIGGEE programme.

“People are coming to us to build e-commerce websites,” Wilson revealed adding, “We have at least 10 companies that we have been servicing through the DBJ Voucher [for Technical Assistance] with GetPaid.”

Looking ahead, Wilson said iCreate is exploring additional acquisitions, one of which he is sure will be finalised this year. However, citing JSE obligation, he refused to reveal the nature of those businesses and the progress of discussions.

“We have a few more acquisitions that complement everything we have in the group…We are a conglomerate for creative ventures — that’s where we’re heading now — and training is at the core.”