In April 2020, when the farmers of Punjab and Haryana began to move in caravan to the borders of Delhi in their protest against the three farm bills aimed at the deregulation and corporatisation of Indian agriculture, the tractor-trolley townships they set up as their habitation at the Delhi borders breached the lines that divide town and country – an antithesis that was first identified in 1872 by Friedrich Engels, the German philosopher and revolutionary socialist associated with Karl Marx, as an obstacle to solutions for agrarian problems.

As time passed and the protests intensified, the farmers at the Delhi borders settled down for a sit-in that was intended to continue until the three controversial farm laws were repealed by the Union government, however long that might take. In the process of settling in, they launched their own newspaper, Trolley Times, then a news channel focused on the protests called Trolley Talkies, then finally, Trolley Towns and Tent Cities constructed from the tractor-trolleys they had arrived on.

The farmers’ tractor-trolleys at Singhu, Tikri and Ghazipur became semi-permanent homes, providing mass housing and communitarian ways of living. The 2,000 odd trolleys proudly stationed in neat rows stretching up to 15 km outnumbered all other forms of architecture at the protest sites and turned the concept of housing on its head. The extensive sit-in finally saw victory in the winter of November 2021, ending one of the most historic protest movements of post-Independent India.

Basic modifications and the use of local material like iron mesh, wooden ladders, plastic bottles and quilts filled with crop stubble helped develop the trolleys into amusing mini homes with ample sunlight and space. Roof supports were added and polyethylene tarpaulin made the trolleys wind and rain resistant. Charging points were attached through a galvanised iron chain to an already existing truck structure, providing power to mobile phones and other devices. The exterior iron surface of the trolleys was used to display solidarity statements and political posters, while coolers, inverters, switchboards were fitted in, ropes were stretched on one side of the tarp for clothes and raised platforms helped store cow dung cakes, blankets, music systems, groceries, water and food.

Groups of five to seven people slept and worked in the trolleys. After the space on the platform was occupied, people also slept under the trolley on mattresses and wooden planks placed between the wheels.

Two conjoined trolleys enabled Jalandhar-based Harpreet Singh Mattu to create a home that had a living room complete with fairy lights, mirrors, television and cosmetics, a bedroom, a toilet and a kitchen. Precise attention was paid to details, structure and construction. The walls of this trolley house had square windows with curtains, tube lights, an air conditioner and plastered flooring – a careful mix of techno-aesthetic elements, taking their cue from the flats in gated societies.

A central feature of the trolley home was the experience of comfort and warmth. A few trolleys had exclusive cabins for women, with curtains hanging from string or vertical wooden flooring as partitions. For additional pleasures of modern living the highway was turned into a courtyard.

Trolleys were also converted into museums, gurughar, gyms, libraries and community centres by different means of vertical and horizontal spanning. Since Punjabi is a flexible language, farmers called the improvisations ‘trolla’ and jatt da jugaad, making the architectural language both gendered and casteist. Tents were also modified for housing, giving refugee tents a new meaning altogether.

As long as the protest continued, the entire makeshift town resembled a construction project under expansion every day, being built by the farmers and the semi-skilled labourers of the adjacent peripheral villages that form the afterlife of Delhi.

Sunil Gulia from Haryana spent Rs 40 lakhs on the modification of his tractor-trolley into a home. He added big tires, swanky seats and a powerful sound system. According to him, his trolley house embodied the concept of baap aur beta (father and son) since it was the foundational ground for the continuity of the protest, both symbolically and technically.

In other similar ventures, the authorship of the agrarian community was clearly visible in the built environment of the trolley home. Such anecdotes taken together embodied a new emergent practice of protest architecture, its labour and empowering sub-cultural meaning. This improvisation neatly dispossessed German philosopher Martin Heidegger’s distinction between a dwelling where people live and a building where people work. The trolleys of the farmers at the Delhi borders changed according to the political and economic aspirations of the protesting farmers.

The trolley towns were a unique form of built architectural housing since there was no state control or sponsorship and no commodification by any private player. The plans were demarcated by the unions and the areas accordingly allocated for the trolleys, with no distance shaping the map. The process made room for the intermingling of different groups and the free movement of women. This gender functionality became significant due to the common projected image of the trolley’s machismo, with groups of men standing outside and blaring bawdy music. 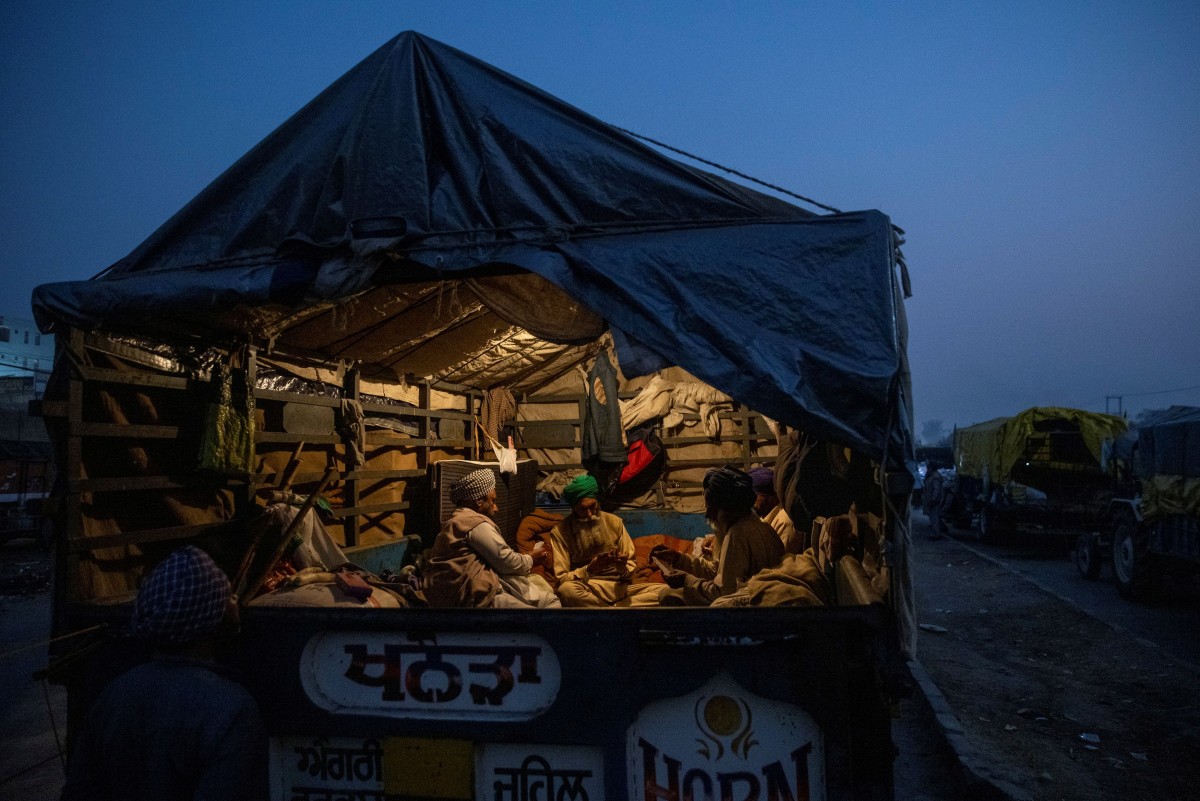 Farmers sit inside a tractor trolley during a protest against the newly passed farm bills at Singhu border near Delhi, India, November 30, 2020. Photo: Reuters/Danish Siddiqui

The precise lines of the trolleys signified a numerical and empirical reinvention of semi-permanent forms of shelter in a political space as foundational way to reassess housing methods. In this construction through togethering, there existed no allegiance to the motherland but rather a legal right for the larger question of sovereignty, sectional interests and provinciality – the periphery populace’s right over the land of the capital. The central figure of the architect also went missing due to the stress on significance over signature. Since the exterior embellishments clearly spoke of the trolleys’ political stance, there was no erasure of identity. Rather, the form was crucially linked to native soil and culture.

The process of the farmers making the Delhi borders their homeland was a cultural byproduct of the soil of Punjab, where sangat (fellowship) shapes the issues of spatiality, temporality, and historicity, thus ensuring that architecture doesn’t develop in isolation but remains entangled with social reality. The trolley towns hence aptly demonstrated that the process of housing can be seen as separate from the hierarchical terrain of law.

In a time when cities are turning into industrial-surveillance towers of alienation due to sprawling real estate leading to an inflated rental market with capital and profit paving the way for a destabilised ownership of land, the farmers’ protest put economic issues on the back burner. The rows of trolley homes that lined the borders of Delhi denoted housing as a fundamental right. The message was clear – the largest political protest in post-independent India refused to be disciplined both politically and architecturally. The fear of dispossession of land loomed so large in the farmers’ lives that every inch of seized urban land had a stake in their claim of ownership and architectural production. The architecture created myriad possibilities of ways of living that are less alienating than those that exist in cities today, less artificial and don’t follow the industrial rhythm. A sense of durability and sustenance emerged from the architecture of the trolley towns. They became symbolic of the working class and the farmers and their allies coming together in the face of oppression to create and claim their own subjectivities of political and architectural consciousness. These columns of conveyance provided legitimacy to the manual and intellectual labour of the farmers and a sociopolitical actualisation of architecture materialised through the vehicle of the trolley home.

Felicity Scott, professor of architecture at the Graduate School of Architecture, Planning and Preservation, Columbia University, once stated, “Architecture is one of the most effective sites through which to enact political claims.” The protesting farmers at the borders of Delhi certainly established a sphere of design, technique and local aesthetic.

An architectural history of the trolley homes will be etched forever in the mutinous landscape of capital. The evolution of the tractor-trolley upon encountering a protest that followed neither form nor function can be called a new discursivityy in the discipline of architecture. In the industrialisation years after independence, war-surplus tractors and bulldozers were imported in the mid-1940s for land reclamation and cultivation. In 2013, India, the world’s largest producer and market for tractors, produced 29% of world’s output of tractors. In 2020, India also modified the form and shape of the tractor and its trolley to the aesthetic of sheltering and valuing humans over concrete. The form of the tractor-trolley as a home for farmers has the potential to shape the impending humanitarian crisis of the Global South through an inclusive architectural approach.

Aatika Singh is a MA student of Arts and Aesthetics at Jawaharlal Nehru University, New Delhi.