Polish-American architect, artist, professor, and set designer, Daniel Libeskind, founder of Studio Libeskind in 1989, believes that buildings are crafted with perceptible human energy, constructed with the intention to address the greater cultural context in which they are built. His commitment to expanding the scope of architecture reflects his profound interest and involvement in philosophy, art, literature, and music.

He addresses the notion of drawings being akin to a score, a piece of music that is interpreted by a like-minded community. Proportions, light, and materiality are all implicated in the drawing, and in this same way, buildings are also called to present space, atmosphere, and illuminate the practice. 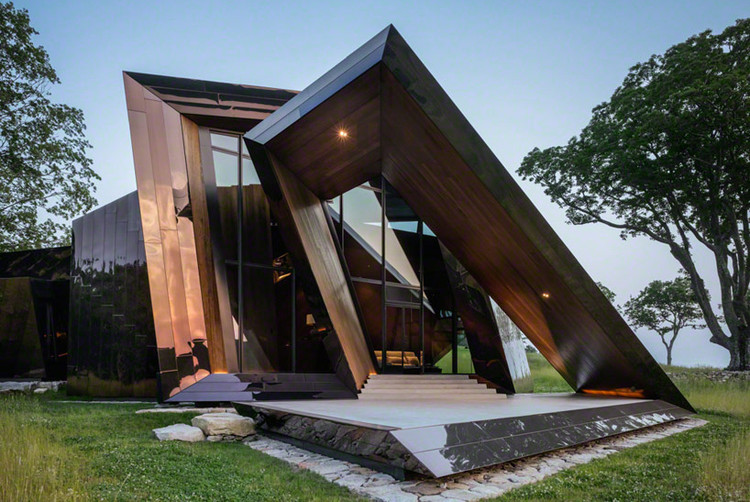 Libeskind believes that drawing is the source of architecture, the hand, eye, and mind being interconnected and sharing in a process that is not inherently intellectual, but a spiritual kind of desire. He continues to note that a building is not a repetition of another building, nor is it built from a formula, however, each building is constructed to communicate the needs of a certain point in time. In the following, we will discuss some of Studio Libeskind’s projects and the way in which they were successful in conveying the ideas of communicating the greater cultural context of specific architectural ventures.

“I Lean Toward Forms that Lead to a Point and that Try to Make a Point”: In Conversation with Daniel Libeskind

18.36.54 House, Connecticut is a home that was designed for artists, intended to be a work of art in itself without the necessity for the use of actual artwork and sculptures within the dwelling as the space itself is to carry artistic inspiration and produce intense sensations. The 2000 square-foot home with a folding ribbon structure of 18 planes, 36 points, and 54 lines is comprised of reflective copper panels, continuing the natural material palette as it stands visibly independent of its surroundings. The home intends to move your vision through the interior of pure wood to the exterior of stainless steel, mirroring the skies and the landscape in which it is surrounded, using a faceted structure to frame the dynamic views from all angles of the site. The building is as Libeskind says, ‘as spiritual as a musical composition.’

In 1988, Libeskind was chosen as the winner among several other internationally renowned architects as per the Berlin government’s request for an expansion to the original Jewish Museum, Berlin that opened in 1933 in a wishful attempt to re-establish a Jewish presence back to Berlin after WWII. Libeskind’s design was the only project to implement a radical, formal design as a conceptually expressive tool to represent the Jewish lifestyle, before, during, and after the Holocaust. It wasn’t until 2001 when Libeskind’s addition to the museum opened, establishing a Jewish presence embedded culturally and socially in Berlin.

For Libeskind, the extension to the museum was much more than a commission but about forming and securing an identity within Berlin which was lost during WWII. He intended to express the feelings of absence, emptiness, and invisibility, which are all expressions of the disappearance of Jewish culture. It was the act of using architecture as a means of narrative and emotion that provided visitors with an experience of the effects of the Holocaust on both the city and culture of Berlin.

The concept of the Grand Canal Theatre, Dublin was to build a powerful, cultural presence expressed in dynamic volumes sculpted to project fluid and transparent public dialogue with the cultural, commercial, and residential surroundings. The composition of the project creates a dynamic urban gathering place and icon, mirroring the joy and drama that is emblematic of Dublin itself, standing as a landmark that creates a focus for the urban context in which it was built, specifically Grand Canal Square, the new urban piazza at the waterfront of Grand Canal Harbor.

Libeskind intended for the architectural concept of the theatre to be based on different stages within the build, as well as represent the main façade of a large public piazza. The piazza acts as a grand outdoor lobby for the Theatre, itself becoming a stage for civic gathering with the dramatic theatre elevation as a backdrop offering platforms for viewing, with the rooftop terrace offering striking views out over the harbor.

The MO Modern Art Museum has been acknowledged to be ‘a cultural milestone for the city of Vilnius and Lithuania as a whole.’ Its aim was to showcase the local art, as well as explore its links with the global art scene. Conceived as the cultural gateway connecting the 18th century to the medieval walled city, the concept of the building was inspired by the historic gates of the city, with references to the local architecture both in form and materials. Libeskind notes that ‘it was thrilling to design an intimate and iconic museum for a great collection of contemporary art.’

The building and its architecture are reminiscent of the history and beauty of Vilnius, serving as a wonderful place to enjoy the art and spirit that the city has to offer. Furthermore, the rectilinear façade is clad in luminous, white plaster that references the local materials of the city, with an emphasis on including public space standing as one of the most important that the Studio incorporates into its designs for the sake of exterior cultural institutions. Museum Founder and Collector, Viktoras Butkus goes on to say that Libeskind’s work is both ‘iconic and democratic’, and that it was important that the museum actively expresses openness and reflects the ethos of the collection, as well as the institution. These generous public spaces throughout the design play a vital role in communicating these ideas.