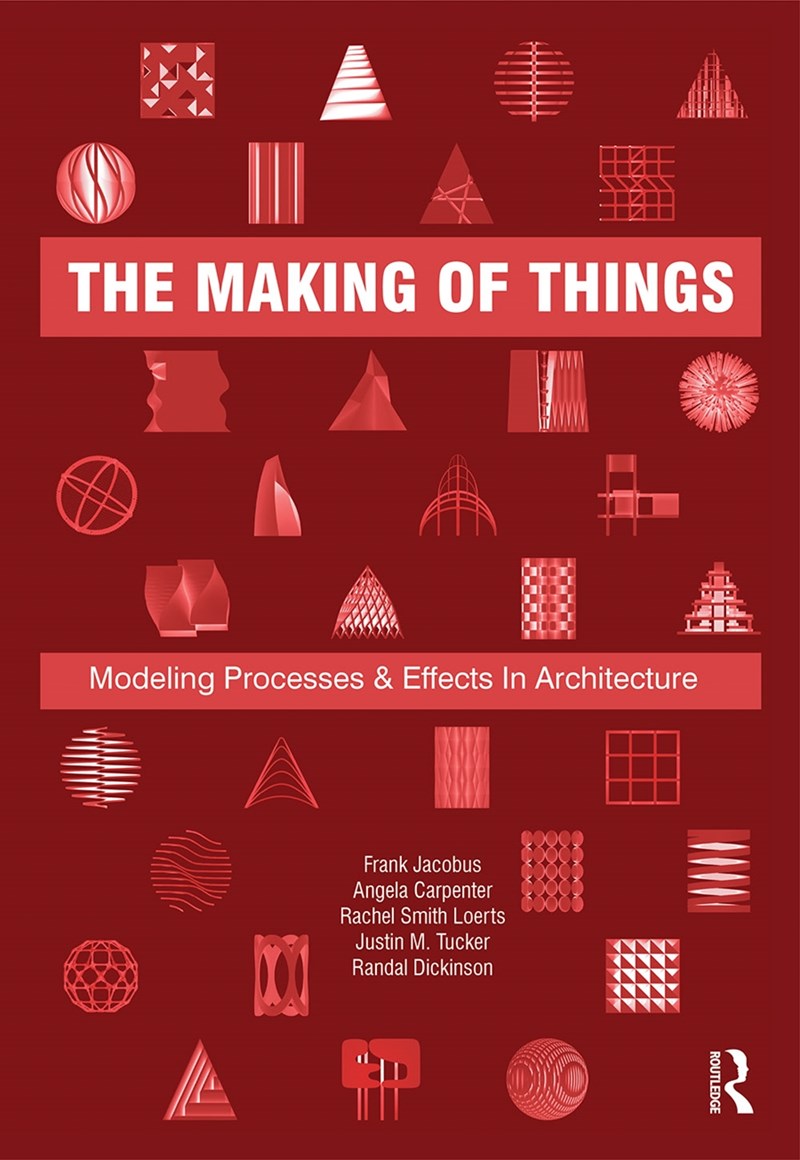 A group of Fay Jones School of Architecture and Design faculty and staff recently published their book, “The Making of Things: Modeling Processes & Effects in Architecture.”

A group of faculty and staff in the Fay Jones School of Architecture and Design wanted to help students become better designers and better design thinkers by providing a compendium of language and tools. So they wrote the book The Making of Things: Modeling Processes & Effects in Architecture.

They realized they could create something that was a combination of showing how to physically make things and understanding why someone might make something a certain way.

“As an educator, I think that’s part of where our students really need to grow is in intentionality and figuring out why they want to do something and how to get the effects that they’re trying to get,” said Frank Jacobus, an associate professor of architecture.

The ideas were rooted in work Carpenter and Smith Loerts had been doing in the school’s fabrication labs to get students familiar with common making processes and also help them know the potentials of using the CNC router, 3D printers, laser cutters and other making equipment.

“We were trying to give a resource that they could look at and better understand the processes and the effects,” Smith Loerts said.

Jacobus said this work is an unusual hybrid of theory and process — since most works focus on one or the other distinctly, yet don’t join them. “But it’s a necessary hybrid. If they really invest in both, I think it’ll make a young person stronger in terms of their design sensibilities. So I hope that’s what happens.”

The authors leveraged existing research in embodied cognition and visual dynamism, pairing it with their collective knowledge in fabrication methods and design fundamentals to craft a comprehensive theory based on what they wanted students to learn. They created a taxonomy — grounded in architectonic theory, form language and building — that illustrates relationships and connections between architectonic elements. In addition, they introduced a comprehensive array of tools used in model making.

The book explores architectonics — the way parts and pieces go together specific to architecture — and provides copious visual examples and illustrations.

While it could be read cover to cover, this is essentially a resource book that teaches about various tools, the appropriate use of tools,  processes and about the decisions designers might make could impact a project.

“We’re theorizing that architecture is composed primarily, if not entirely, of frames, planes or solids, which each include an inherent language of form and construction possibilities. The book plays those possible variants out visually,” Jacobus said.

In exploring these ideas, they realized they needed to create their own original content and objects for the book, and then reference existing examples. In the end, they created 650 or more objects for the book — with another 100 or so that didn’t make it in. They hand sketched most of their ideas, and then several dedicated design students translated all of those into a digital format.

They wanted to show students what these objects could look like as a built work — that not only could these be ideas for making models, but they also are concepts that architects are designing and building. So they spent many hours online searching for existing examples of these objects. Under each object, in italics, they noted the name of an example work and its designer.

For each of the objects, they’ve described them through a list of several characteristics or effects. Under each object, they’ve also noted the equipment and materials used to construct it.

A frame object shaped like a pyramid, for instance, is described with these effects: strength, regularity, stasis, structure, self-same, boundary, crescendo, orderliness and rational. The example of built work is the Louvre Pyramid by I.M. Pei. The primary construction method is using wood working tools and wood or plastic; the secondary method is using a laser cutter with wood or plastic.

Carpenter said that the book covers all the tools that are available in the Fay Jones School labs and helps students understand what tools they could use and why. Instead of always defaulting to the laser cutter, for example, it explains other options along with the effects or results each can give. It helps students align their actions with their goals.

“Because a laser cutter is going to give you a different effect on the edges than if you were to CNC route that same piece,” Carpenter said.

Making models is a tool students use to better understand form, space and gravity. Fay Jones School students start making them in their first year of design studio, to practice putting together the pieces of a building.

“I think it’s part of a good design school’s process for students to go from 2D thinking to 3D thinking — and back and forth,” Smith Loerts said. “Each time a model is made, a certain amount of resolution starts to happen.”

Jacobus said that each model — by its materials and process of being made — already suggests ideas and intentions, though students might not realize that. They may be very simply trying to physically express a concept.

“Experienced architects become good at reading intentions into an object and know that it matters which tools you’re making it with, what lines it has in it, what material it’s made of, what shape it is, etc. All that matters,” Jacobus said. “So that’s primarily what the book’s about: How do you make those decisions intentionally; how do you know what the thing you just made means, what its effects are, what kinds of experiences might it contribute to, etc.?”