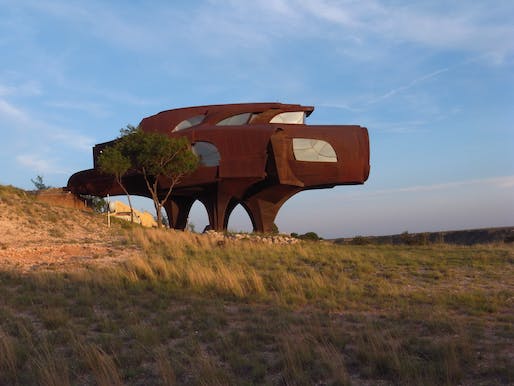 Two patrons of former Texas Tech University professor Robert Bruno’s famous Ransom Canyon are up in arms over the fate of one of American architectural history’s most significant self-built structures.

Texas Monthly is reporting that plans for the corten steel creation have caused an outcry of sorts following news of its recent conversion into a vacation rental outside of Lubbock.

Born out of a sculptural installation that now stands in front of Texas Tech’s architecture building, construction began in 1973 on the structure that eventually grew to around 2,200-square-feet. It took Bruno 35 years to complete the structure, which he moved into just months before his death from cancer in 2008. Now, over a decade after it was last inhabited, the home’s future has become the exclusive endeavor of an enterprising young realtor named Courtney Bartosh.

Bartosh began listing the home for $1.75 million back in November after acquiring the property from Bruno’s daughter Christina, who had been serving as its steward and sometimes impromptu tour guide alongside Bruno’s longtime business partner Henry Martinez and former student W. Mark Gunderson.

The latter say Bruno’s legacy and intention is not being honored by the realtor, who bought the house for a price much lower than it is being listed for, according to the architect’s daughter.

“It’s being treated like a motel,” Martinez told the magazine “and I think that’s wrong, ethically wrong. If I was a millionaire and I had the money, of course I’d buy it. But it sure as hell wouldn’t be for an Airbnb.”

Prior to the sale, Texas Tech’s interim dean Urs Peter Flueckiger says he had intended to create a foundation that would have saved the house from its rental property reality, which he deemed “heartbreaking.”

Martinez and his compatriots claim Bruno left much of the interior unfinished out of expediency and that he did leave clear instructions with them for what he wanted to do with the house, including the installation of a ground-floor library and series of nude motifs, which have now fallen by the wayside.

Tragically they will have to sit through a painstaking process set to play out on Bartosh’s TikTok and Facebook project page. The realtor says contractors are currently being vetted to finish the currently underway renovation effort that her social media followers “love” and will look to be completed sometime in the next year.

Her detractors, however, remain less than optimistic.

“It’s not going to be anywhere near what it used to be after they finish with it,” Martinez said. “The outside might stay the same, but the inside will not.”