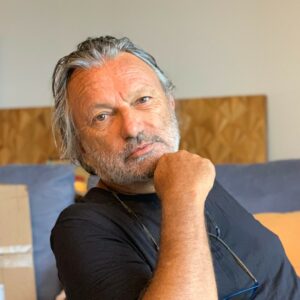 Coral Bay, St. John, USVI – Wayne Lloyd of Coral Bay had a dry wit, a poet’s soul, a philosopher’s mind, and an empathetic heart. When he was diagnosed in 2019 with a liver disease that was certain to progress, he began writing a blog that would help reveal all these aspects of himself to others.

“In a couple years I will, ‘if life is fair,’ (as my friend Percy often says) celebrate my seventieth birthday,” he wrote on April 5, 2021. “Many things are starting to feel like now or never. I have a lot of stuff in my head, my heart and what’s left of my memory that I want to explore. Hopefully some I can resolve. Mostly I want to tidy up the place and compose those things I may never resolve into a format someone else might find useful as a starting place.”

Life, though, is neither fair nor unfair, as Wayne well knew. He died on March 24, in the Intensive Care Unit at Houston Methodist Hospital in Houston, Texas, while waiting for potential donor organs for a heart and liver transplant that never came. He was 68.

Wayne was someone who was hard to forget, even if you only met him once. He had a classic, timeless style that included a love of hats and anything linen. He loved cooking and feeding anyone around him. He loved experiencing and embracing new cultures and would talk to anyone he encountered.

Underneath his distinctive style, though, was a man of substance. A one-time saxophone player, he loved music and learned every lyric to songs that got his attention. He loved to hug people and would be the first to say “love you” as salutation to almost anyone. He found lifelong friendships and personal growth for decades through self-facilitated men’s groups. One of his friends called him “a solid and soulful man whose sharp wit, whose not-suffering-fools-gladly attitude, did not overshadow his compassion.” Another remembered him as “deeply honest, sensitive, thoughtful, caring.” You didn’t want to miss a moment with him, because you never knew when he would point out some element of human experience that you wouldn’t notice otherwise.

Wayne Lloyd was born in Worcester, Massachusetts, in 1953, the third of six children born to Clifford J. Lloyd Jr. and Dorothy E. (Haynes) Lloyd. His family moved to Westborough at an early age, and he attended the town’s public schools through high school graduation in 1971. Though he had little interest in sports and never considered himself an athlete, he was an outstanding long-distance runner on the high school’s boys’ cross-country team. In 2013, he and other members of the championship 1969 crosscountry team were inducted into the Westborough High School Athletic Hall of Fame.

After high school, Wayne took a year off before going to college. With another friend, he decided to retrace Henry David Thoreau’s trek across Cape Cod, walking from the Cape Cod Canal to Provincetown – a distance of more than 60 miles – for no other reason than because they could. It was a harbinger of Wayne’s quest for adventures.

He developed an early interest in environmentalism and ecology, which triggered his desire to study forestry at Unity College in Unity, Maine. “I had a self-image of being half George Harrison and half Strider, the Ranger,” he once wrote about his choice of majors.

But he soon realized that his studies were putting him on track for a career in the commercial paper industry rather than to nurture the forests, so he left after two years. It was the beginning of a lifelong journey.

After a few years of hitchhiking across the country multiple times, and trying his hand at a variety of jobs, he returned to Maine and became a woodworking craftsman. He started his own cabinet shop in Belfast and became co-owner of a gourmet take-out restaurant. During this time, he built a house for his family, including his two surviving children from a previous marriage, his daughter, Ryan, and son, Colin Lloyd. He became a master composter and avid gardener.

But woodworking, construction, and gardening alone did not define him. Wayne had a lifetime of experiences, including a beloved brother with Down syndrome, that helped him identify bullying, abuse, bigotry, racism, and the way those in most need of kindness struggled to find acceptance. Wayne became a certified mediator and counselor for domestic abuse intervention, and for several years he worked for a domestic violence intervention program in Maine called Time for Change, acting as co-facilitator for Batterer’s Education Groups.

During this time, Wayne also worked with teens who had been expelled from school but wanted to finish their education. He tutored them in reading, writing, and arithmetic. He would also spend time with them after hours or on weekends as if they were his own children — the start of mentoring that he carried through to the last days of his work life.

“I remember he’d have two or three troubled kids with him,” recalls Colin, his son, “They’d go to the park or other places, doing the things that we would do with Dad.”

His career path as a counselor and tutor required a college degree, so Wayne decided in mid-life to return to school. A visit to Vermont College to explore a degree in social work resulted, instead, on a chance meeting with an English professor and eventually led him to a bachelor’s degree in writing and creative non-fiction. Not long after that – with his two children grown — Wayne followed a friend to St. John in the US Virgin Islands and went to work as resident manager of Maho Bay Camps, one of the early eco-resorts in the Caribbean. The move changed his life in more ways than he could have imagined.

Serendipitously the same year, the owner of the resort also hired consultant Rosanne Ramos, then an architectural and industrial designer from Providence, R.I., whose focus was on built environments for persons with disabilities and aging population. After a year of working remotely, Rosanne recalls “we both arrived late to a project wrap-up party at Gallows Point, and there was only one loveseat open to sit at, and well, that was it, we didn’t talk to anyone else the entire evening. I was hooked.” Friends describe it as a love story for the ages.

Wayne moved to Providence the following year to live with Rosanne, working as a project manager for her company Inclusion by Design and Two Ton Architects. The couple returned to St. John in 2009, where Wayne became manager of the Maho sister property, Concordia Eco-Resort. The following year they got married.

“Out of all the mistakes I’ve made,” he wrote to a friend, “my relationship with Rosanne is the single most screamingly contradictory act I’ve accomplished to undo the common belief that I am a total f***- up.”

Rosanne, who grew up in Houston, says that despite differences in age and geographical upbringing, they shared a passion for laughter, loving, and living. “There was never a dull moment,” she laughs, recalling their 17-year romance, “It’s mind-blowing how much in common we had – and how different we were.”

In 2015, the couple decided to utilize their skillsets and experience and started their own company on the island, Antares Property & Hospitality, offering a variety of services from property management to residential design to concierge services. They chose Antares as the company name because both were Scorpios, their birthdays only a week (and a few years) apart. Antares is the brightest star in the Scorpius constellation.

In 2017, back-to-back Category 5 hurricanes lay waste to St. John, destroying homes, stripping and uprooting trees, and causing catastrophic damage. Wayne and Rosanne chose to stay and help rebuild the island they had adopted as their home, despite the personal trauma and community hardships. For Wayne, staying was never in question. He would never abandon those he came to love and considered family. It was this sense of loyalty and compassion that he embodied and conveyed his entire life to family, friends, and strangers.

“He always had a great capacity to love,” said his daughter Ryan.

Wayne was predeceased by his parents and a brother, Robert. He is survived by his wife, Rosanne Ramos Lloyd of St. John; his son, Colin, of St. John, and his daughter, Ryan, of Evans, Colorado. He’s also survived by three brothers, Clifford and his wife, Taffy, of Mexico; Richard and his wife, Jennifer, of Eastham, Massachusetts; and Donald of Eastham; a sister, Sally Inman and her husband, Stephen, of Denver, Colorado; numerous nieces and nephews; a large extended Ramos family in Texas and beyond; and thousands of heartbroken friends on a little island in the Caribbean and around the world.

A private service for family and close friends was held Sunday, March 27, in Houston. A celebration of life will be held on St. John in the future. Funeral arrangements by Forest Park Lawndale Funeral Home in Houston.

Fond memories and expressions of sympathy may be shared at www.ForestParkLawndaleFH.com for the Lloyd family.