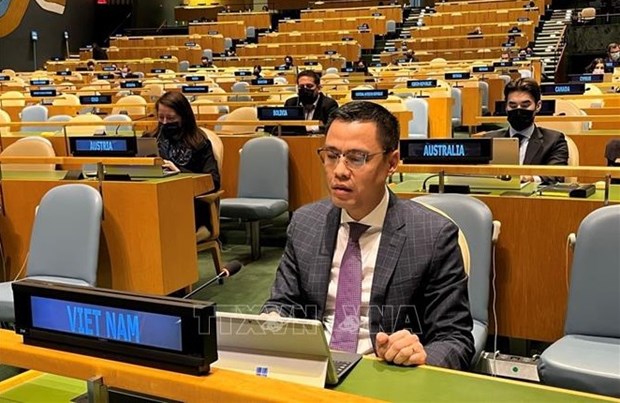 New York (VNA) – Vietnam
hopes the United Nations (UN) will continue supporting the country in its national construction
and development, and in realising common goals of the international community, said
Ambassador Dang Hoang
Giang, the new Permanent
Representative of Vietnam to the UN.

Ambassador Giang thanked President Shahid for his support for Vietnam
during the country’s tenure as a non-permanent member of the UN Security Council in 2020-2021, as well as in its activities
at the 76th General Assembly.

He promised to make every effort to promote Vietnam’s proactive participation
and contributions to the common work of the international community.

For his part, President Shahid spoke highly of Vietnam’s
responsible and active role at the UN, especially during its tenure as a
non-permanent member of the UNSC in 2020-2021.

He shared the
priorities that he, as President of the UN General Assembly, will promote in the coming time,
including high-level debates on tourism promotion and environmental protection,
and consultation sessions on the UN Common Agenda report.

He expressed the hope to continue receiving Vietnam’s support for
the above-mentioned events as well as the UN’s activities in general./.