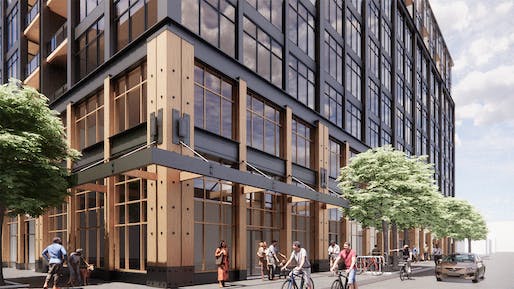 Chicago’s steel-framed architectural identity may be about to change thanks to the reintroduction of mass timber as the primary building material in a new 9-story tower designed by local studio Hartshorne Plunkard Architecture for developer Sterling Bay. Noted in a report from Chicago YIMBY, the new project “will be the tallest proposal of its kind in the region.”

Sterling Bay is the same developer behind the controversial $6 billion Lincoln Yards plan, which is set to be completed in three years. Their new proposal, sited several blocks to the north of 2100 N. Southport Avenue, is worth a reported $50 million and would provide the Lincoln Park neighborhood with a total of 130 apartment units once it is completed the same year. In a press release, Sterling Bay’s CEO Andy Gloor said it will “set a new standard for future-forward development in [Chicago].”

This news comes at a pivotal time in the use of mass timber and the city. Last year was the sesquicentennial anniversary of the Great Chicago Fire that destroyed an estimated 17,000 structures and changed the way we build and design cities forever. Using the attention granted to Milwaukee’s new, record-breaking Ascent Tower as a guide, advocates are looking for a change in building codes to trigger what could potentially be a shift away from glass and steel building designs — in a city whose skyline is so defined through the work of storied architects like Louis Sullivan, Jeanne Gang, and Mies van der Rohe.

Blair Kamin’s report from two years ago detailed the reluctance at the time to adapt mass timber just a year removed from major updates to its building code that was ignorant of its proven fire safety performance and therefore restricted its use to interiors and buildings under 85 feet. Since then, propelled by the success of Carol Ross Barney’s 2018 McDonald’s flagship project and Perkins&Will’s concept for an 80-story structure in South Branch, the city has agreed to some changes that left Sterling Bay feeling confident it could present the new development to the Department of Buildings’ Committee on Standards and Tests successfully.

That notion turned out to be correct, and, after winning approval from the body and local alderman’s office, the project will continue towards its eventual construction — but it isn’t out of the woods yet. As Chicago YIMBY reports, development must endure several stages of approval that include even further specific zoning changes before an anticipated groundbreaking can commence early next year. Sterling Bay is hopeful that it will engender even greater optimism for such projects and says to expect additional timber projects once that threshold is crossed.

“We’d love to do more,” Gloor told the Chicago Tribune recently. “Hopefully, this is the first of many.”