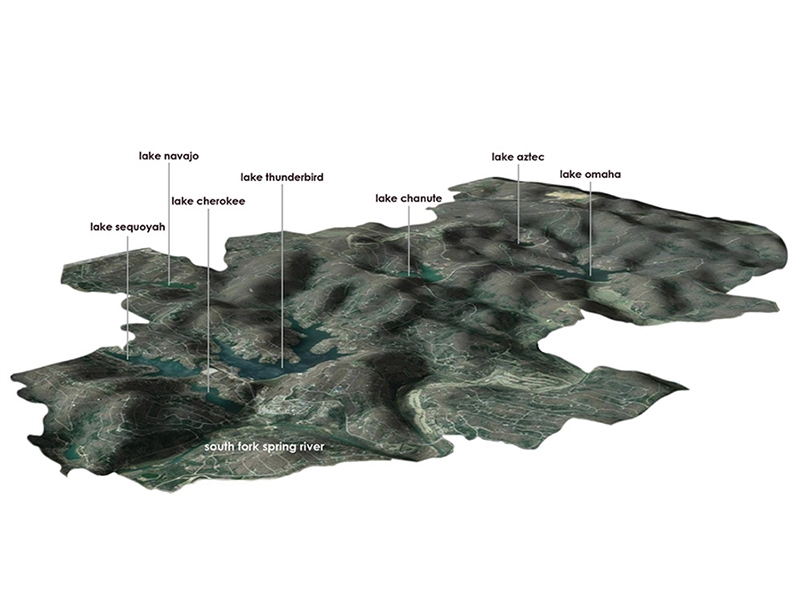 All images courtesy U of A Community Design Center

This image showing the seven lakes at Cherokee Village is part of the “Cultural Mappings of Cherokee Village, Arkansas” project by the U of A Community Design Center that won the Special Projects category in The Plan Award 2022.

A U of A Community Design Center project has won in The Plan Award 2022, an international design awards program recognizing excellence in architecture, interior design and urban planning.

“Cultural Mappings of Cherokee Village, Arkansas” won the Special Projects category. Sponsored by a National Endowment for the Arts (NEA) Our Town grant and the city of Cherokee Village, these mappings support a separate master plan commissioned by the 23-square-mile rural planned community developed in 1955 in north central Arkansas.

Design for the project was led by the U of A Community Design Center, an outreach center of the Fay Jones School of Architecture and Design at the university. Steve Luoni, Distinguished Professor and the Steven L. Anderson Chair in Architecture and Urban Studies, is the director of the center.

“Surprisingly, mapping revealed a far more diverse and complicated set of underlying influences than is evident in Cherokee Village’s current environment,” Luoni said. “These influences are helping us as urban designers to shape new development possibilities for a cultural landscape where decline has followed the passing of its first generation of property owners over 40 years ago. New insights into Cherokee Village’s past gained from cultural mapping — like, there were no Cherokee in Cherokee Village — put designers in a better position to ask: What do we do with complex cultural issues? The mapping led us to focus on new kinds of hospitality landscapes as a planning approach to engage a wider range of development possibilities in the village.”

Urban designers rarely get the opportunity to stage a deep dive into the cultural forces shaping a place before preparing plans, Luoni said. For this project, the U of A Community Design Center explored memory and heritage surrounding the development of Cherokee Village as a place through the discursivity, conversation and debate central to cultural mapping and its participatory-based forms of inquiry. The project moved beyond viewing the map simply as object or artwork to using mapping as a process that is aimed to make visual the cultural implications and impacts of community development seen, unseen and forgotten. Formulation of the content was a collective and collaborative inquiry among residents, community organizations, artists, folklorists, historians, architects, landscape architects and urban designers.

“It has been a pleasure working with Steve Luoni and the entire Community Design Center staff on this grant,” said Jonathan Rhodes, community developer for Cherokee Village, Arkansas. “The center’s team has done a remarkable job capturing the historic and cultural layers that shaped Cherokee Village’s development. As one of the first of its kind in the nation, Cherokee Village became a model for many other communities across the state, region and nation. Cherokee Village has endeared itself to countless families who have been fortunate to claim it as their special place in the Ozarks. The center’s mapping and design work is critical to helping us celebrate and understand our past while also informing future conversations about how we want to evolve as a community. Congratulations to the Community Design Center for being a true asset to Arkansas and for this well-deserved award.”

The design team used a “deep map” to sketch a memoir of Cherokee Village. The project cuts across dominant and minor histories, shedding light on the diminishing returns in modern suburban approaches to land development. Influences from indigenous, camp and settler frontier traditions played a formative role in shaping at least the aspirations of John Cooper, who developed Cherokee Village in the mid-20th century.

There’s also a Fay Jones connection at Cherokee Village. John Cooper was Jones’ first big client, and there are several Jones-designed buildings in the community, including 10 townhomes, a city hall and a town center. Cooper commissioned Jones for buildings in all his subsequent developments, including Bella Vista’s clubhouse.

Other finalists in this category of The Plan Award program were the Jian Mu Tower, designed by CRA-Carlo Ratti Associati (based in Turin, Italy, and New York City); the Blossom of Yinli, designed by Studio Link-Arc, LLC (based in New York City); and the Ad hoc Epidemic Prevention Hospital, designed by Hanchenping Studio in the School of Architecture and Design, China University of Mining and Technology (based in Xuzhou, China).

In its eighth year, The Plan Award program recognizes excellence in architecture, interior design and urban planning through 20 categories. This is the second year that this awards program has held a Special Projects category recognizing installations, exhibits and design research. The U of A Community Design Center has won the category both times. An international jury made up of leading figures in the architecture, design, real estate and academic fields selected winners.