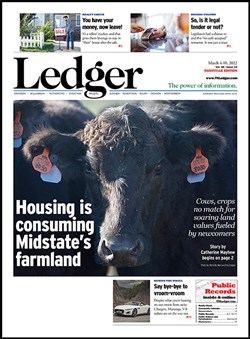 The population of Spring Hill was 986 in 1980. It was a proudly rural farming community with the roots of many of the farming families going back hundreds of years.

Then came General Motors, which built a plant to build its Saturn product line on 1,000 acres that was formerly the Haynes Haven Farm.

By the time the plant opened in 1990, Spring Hill’s population had grown to 1,464. And that was just the beginning.

Today, more than 50,000 people call Spring Hill home, and with them came schools, city services, roads and commercial businesses, many of which were built on land once reserved for crops and livestock.

Whether this is progress depends on which side of the fence you’re standing – in the backyard of your newly built home in a burgeoning subdivision or on land your family has farmed for generations.

Alicia Fitts is relatively new to breeding cattle in Maury County, but her family has farmed for generations. She’s watched acreage get gobbled up for development for decades.

“My brother and I stand on the shoulders of those who came before us,” she says. “We’re trying to steward the land in an area where people eat land for breakfast and spit it out. “

Tennessee’s farmland is the fourth most threatened in the nation, partly because of poorly planned real estate development, states a report titled “Farms Under Threat: The State of the States,” conducted recently by the American Farmland Trust.

The report found that Tennessee lost nearly 660,000 acres of agricultural land to development 2001-2016. Of that, 212,000 acres were considered “nationally significant,” or land best suited to grow food and crops.

Brooks Lamb, who grew up on his family’s farm in Marshall County and now serves as a program associate and special assistant to the Farmland Trust’s president, has a master’s degree from the Yale School of the Environment that focused on environmental stewardship of small- and mid-sized farms in the face of rampant development. 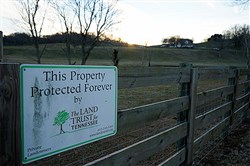 The Land Trust for Tennessee has saved 45,000 acres of farmland, like that of Alicia and Steve Fitts, from development since 1999.

— Photos By Michelle Morrow |The Ledger

“No matter how you slice it, the reality is clear,” he acknowledges. “We’re losing far too much farmland to irreversible development. Once you build houses on that land, you’re never going to tear them down and replace them with crops, trees or livestock.”

This farmland crisis is a confluence of factors, a sort of perfect storm. Commercial development is one. Residential development – particularly low-density types that place one home on a large tract of land – is another. Increased infrastructure to support that development is yet another.

Capping the list is an aging farmer population. Many farmers who sell their land use the money for retirement or put a “for sale” sign out because their children don’t want to take on the back-breaking job.

“A good farmer is one who brings competent knowledge, work wisdom, and a locally adapted agrarian culture to a particular farm that has been lovingly studied and learned over a number of years. We are not talking here about ‘job training’ but rather about the lifelong education of an artist, the wisdom that come from unceasing attention and practice.” – Wendell Berry, American novelist, poet and Kentucky farmer.

In the early 20th century, chances were good you knew a farmer if you weren’t one yourself. More than half the population lived in rural areas, and close to half the U.S. workforce was employed in agriculture.

That shifted dramatically as the century wore on, with small and midsized diversified family farms replaced by large, specialized farms. As of 2000, 1.9% of the employed labor force worked the land, the United States Department of Agriculture reports.

In Tennessee, rapid growth in major urban areas has put pressure on surrounding rural areas as urban populations spread out in search of affordable housing. 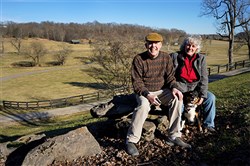 “There’s a respect for what’s around us and the people who have literally put blood, sweat and tears into this place,” says Alicia Fitts, pictured with her brother, Steve Fitts.

“The challenge in Middle Tennessee is the area is prospering and therefore attractive to businesses and people wanting to move here,” says Charlie Hatcher, Tennessee’s commissioner of agriculture and himself a fifth-generation farmer in the state. “Tennessee is at the top of fiscally responsible states – businesses and people see that and want to come. This helps in job creation, but the challenge over the next decade and beyond will be how to manage loss of land that’s used for food and fiber production.”

The hot spots for converting farmland to development, the American Farmland Trust reports, are Chattanooga, Knoxville, Nashville and Memphis. Predictable, but the next statistic might surprise some:

The largest percentage of land compromised or developed isn’t commercial or traditional residential. About 78% percent is low-density residential. An example would be a 100-acre farm sold off and divided into 25-acre lots. Want to see what that looks like? Just drive down Sneed Road in Franklin.

“Tennessee’s farms are under some of the greatest threats of any state in the nation,” Billy Van Pelt II, American Farmland’s senior director of external relations, recently wrote. “This report identifies the urgent need for action to protect this land that is critical for Tennessee’s agricultural economy and its ability to grow food and other crops. We’ve all witnessed the impacts of empty grocery store shelves in recent months – we must be vigilant in protecting our farms and ensuring that our food system is more secure and resilient.”

Commissioner Hatcher says it’s not so much about securing the food system as it is about the quality of what you’ll find in a grocery store.

“As a nation, we have the safest, healthiest and most abundant food supply in the world,” he adds. “When a local farm is sold, that will not have a direct impact at the local grocery store. The typical grocery store accesses food from a broad range of suppliers and locations.

“In general, locally grown products are fresher than products that must be transported long distances. We have seen significant growth in farmers’ markets statewide during the last decade, and demand for local food and food products spiked at the onset of the pandemic. We are proud to see this demand remains strong, as people desire to know where their food comes from and the farmer or farmers who grew it.”

“We see those conservation values,” says Emily Parish, the vice president of the Land Trust For Tennessee, which is working to conserve the unique character of Tennessee’s natural and historic landscapes and sites.

“For instance, a lot of our songbirds love those areas between farmland and forest. You lose flood plains. On a more emotional note, we lose that sense of place. I see places like that all the time and think I used to love looking at that farm, and now it’s gone.”

Judith Smith remembers when she saw wildlife, even at the most basic level, return to the cattle farm she and husband Jonathan own in Joelton, just outside Nashville. Their land had been stripped of life-giving nutrients after years of neglect before they bought it.

“The healthier the ecosystem is, the more diversity and species there are,” she says. “When Jonathan first noticed dung beetles in the manure he was so excited. It meant the land was coming back. Whether it’s food that sustains us, whether it’s the grass that feeds your soul or the oxygen.” 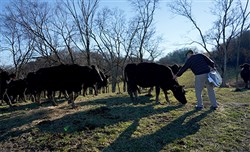 Steve Fitts interacts with some of his cattle on Cherry Ridge Farm in Spring Hill.

Treat the earth well: It was not given to you by your parents, it was loaned to you by your children. We do not inherit the Earth from our Ancestors, we borrow it from our Children. — Ancient Indian Proverb

More than 40 years ago, the American Farmland Trust was founded to preserve this country’s farms and ranches. Today, millions of acres have been saved from becoming malls and subdivisions. Since 1999, the Land Trust for Tennessee has saved more than 45,000 acres of farm land from development by use, in most cases, of what’s known as a conservation easement.

You, the farmer, retain ownership of the land and the right to pass it down to your heirs or sell it. But if you sell it, the new owner is under that same agreement and can’t then turn around and build a subdivision on it. The same goes for your heirs.

“We are the only conservation organization in Tennessee that focuses on farmland,” says Parish of the Land Trust For Tennessee. “There’s so many reasons why people reach out to us, but everyone has the common thread of caring about land stewardship and they want to make sure when they’re gone their land won’t be developed or chopped up.”

Sometimes farmers contact the trust and other times the trust tries to educate farmers in threatened areas about the conservation easement option, although the process is entirely voluntary. That’s how Jonathan and Judith Smith learned about the program.

“It’s difficult if you have heirs,” says Jonathan, whose Joelton farm raises cattle and chickens. “That’s a lot of how farmland has disappeared. We didn’t want that to happen. We preferred to see this fantastic piece of property stay a farm. One of the reasons they were interested in our geographic location is how many subdivisions were close to our farm. Any time you can see any property you can develop, it’s being developed.”

For Alicia Fitts and her brother, Steve, putting their farm under a conservation easement not only honors their parents who farmed the land before them and started the process 14 years ago, but it gives them peace of mind about the future.

“When your land goes from $500 to $26,000 it’s a pretty clear decision. The difference now is that property owners have the option to use the land trust and they can put half the land under the trust and sell the rest for liquidity. It’s not an all or nothing decision.

“We both are very aware that we steward what we have,” she points out. “There’s a respect for what’s around us and the people who have literally put blood, sweat and tears into this place. Sometimes business decisions are not about the bottom dollar.”

And as land for development becomes scarcer, the bottom dollar can be almost staggering.

“I’ve met a lot of people who refuse to sell their land, who are getting offered $20,000, $30,000 or $40,000 an acre that would make them instant millionaires,” Lamb says. “They could stop doing the back-breaking labor of maintaining their land. They could let go of the stress of farming. And they refuse because they have an attachment to and deep love of their land and their place. And I think there’s a lot we can learn from that example.

“To learn from people who have a deep affection for their land.”