The Quorum Court approved spending $460,857 in federal American Rescue Plan money at its meeting Tuesday. This included $428,000 to pay for services the Little Rock-based consulting firm A.G. Witt to make sure all applicable laws, rules and regulations are met for county projects receiving the money, as well as to help create necessary documentation.

County Judge David Hudson told justices of the peace in a special meeting the firm would bring skills and a background of experience to the county others couldn’t.

Hudson has said the county has been allocated $24.8 million in rescue plan money. This includes $10 million that can be used for general government services in accordance with a rule the U.S. Department of the Treasury issued in January, and about $14 million to use under more restrictive guidelines of the State and Local Fiscal Recovery Funds program. All this money has to be spent by Dec. 31, 2026.

The Quorum Court approved on March 15 holding the $10 million for anticipated jail construction and hiring a consultant to help use the remaining money.

Hudson said the majority of A.G. Witt’s attention will be devoted to the administration of the $14 million, the pot of money also paying for the county’s contract with the firm. The cost of the contract will not exceed $428,000, with the scope of work to be determined beforehand and billing to be based on the work provided.

The county judge’s office asked three firms for proposals to provide services to the county out of more than 30 firms it reviewed, according to Hudson. The office determined A.G. Witt’s proposal was the best of the two it received. He noted the Fort Smith has a contract with A.G. Witt related to the Federal Emergency Management Agency and provided a positive reference on the firm.

Danny Aldridge, justice of the peace for District 6, said A.G. Witt comes highly recommended by the Association of Arkansas Counties and Lindsey Holman, a consultant hired by the association. Aldridge, in turn, recommended the county hire the firm.

The Quorum Court approved spending $214,365 for the paging system, along with $620,000 for a new ambulance for Sebastian County Emergency Medical Services, at its meeting April 19. Tuesday’s proposal explained the most current quote for the system was more than what justices of the peace agreed to originally.

The Quorum Court was also briefed on additional projects the county recommended be paid from the $14 million. Hudson said one of the priorities is the county jail, which has had crowding issues for years.

The most expensive project justices of the peace talked about, priced at more than $3.5 million, was the county’s mental health specialty court with an expansion from 2023 through 2026.

Hudson has said the Quorum Court funded the program from 2021 through 2022 with a $550,000 appropriation. It opened Jan. 1, 2021, as an alternative sentencing and jail diversion program for the county.

An overview of the proposed continuation/expansion provided in the meeting material says the $3.5 million includes money for two more county probation officers, a deputy public defender and staffing for treatment through the Guidance Center in Fort Smith to support more mental health court participants.

Rusti Holwick, chief executive officer for the Guidance Center, wrote in a letter to the Quorum Court enhancing and growing the multidisciplinary treatment team for adults who are or at risk of being involved in the mental health court is a continued need. She cited the Sebastian County Prosecutor’s Office in stating the county circuit court experienced a 30% increase in involuntary commitment filings due to serious mental illness over the course of three years: 1,968 in 2015, 2,265 in 2016 and 2,428 in 2017.

The covid-19 pandemic has also created an “increasing demand” for behavioral health care, as well as a workforce shortage, according to Holwick.

Another project proposed for American Rescue Plan money — more than $2.8 million — was the implementation of a sobering center through 2026. Hudson said the sobering center would serve as a place to which intoxicated people who aren’t dangerous or violent would be diverted from the jail to receive short-term treatment.

The Guidance Center is interested in partnering for the operation of the facility, according to the project overview. The Guidance Center has been staffing and operating the Sebastian County Five West Crisis Stabilization Unit since 2018, a site to which those with mental illnesses are diverted from jail to treatment across a six-county area. The proposed budget for the sobering center includes $175,000 for building remodeling at the Guidance Center to support this initiative.

Holwick said if approved, this would be the first sobering center to be implemented in Arkansas following the state Legislature’s passage of Arkansas Act 587 of 2021 last year. This allows a law enforcement officer to take someone intoxicated to a sobering center rather than a jail at their discretion.

Other projects the county proposed include:

• Installing Reme Halo ventilation systems using ultraviolet light to kill airborne viruses in buildings that don’t have them and changing filter cartridges in those that do: $73,990.

• Creating more space for people to enter and exit the south entrance of the Fort Smith Courthouse: $50,000.

• Purchasing up to two years of disinfecting and cleaning supplies that would be distributed to all county facilities: $32,238.

Funding all the proposed projects — including the contract with A.G. Witt, the new paging system and ambulance — would leave the county with just under $1.2 million of the $14 million left over, according to the meeting material.

The Quorum Court will consider the projects at its meeting June 21. 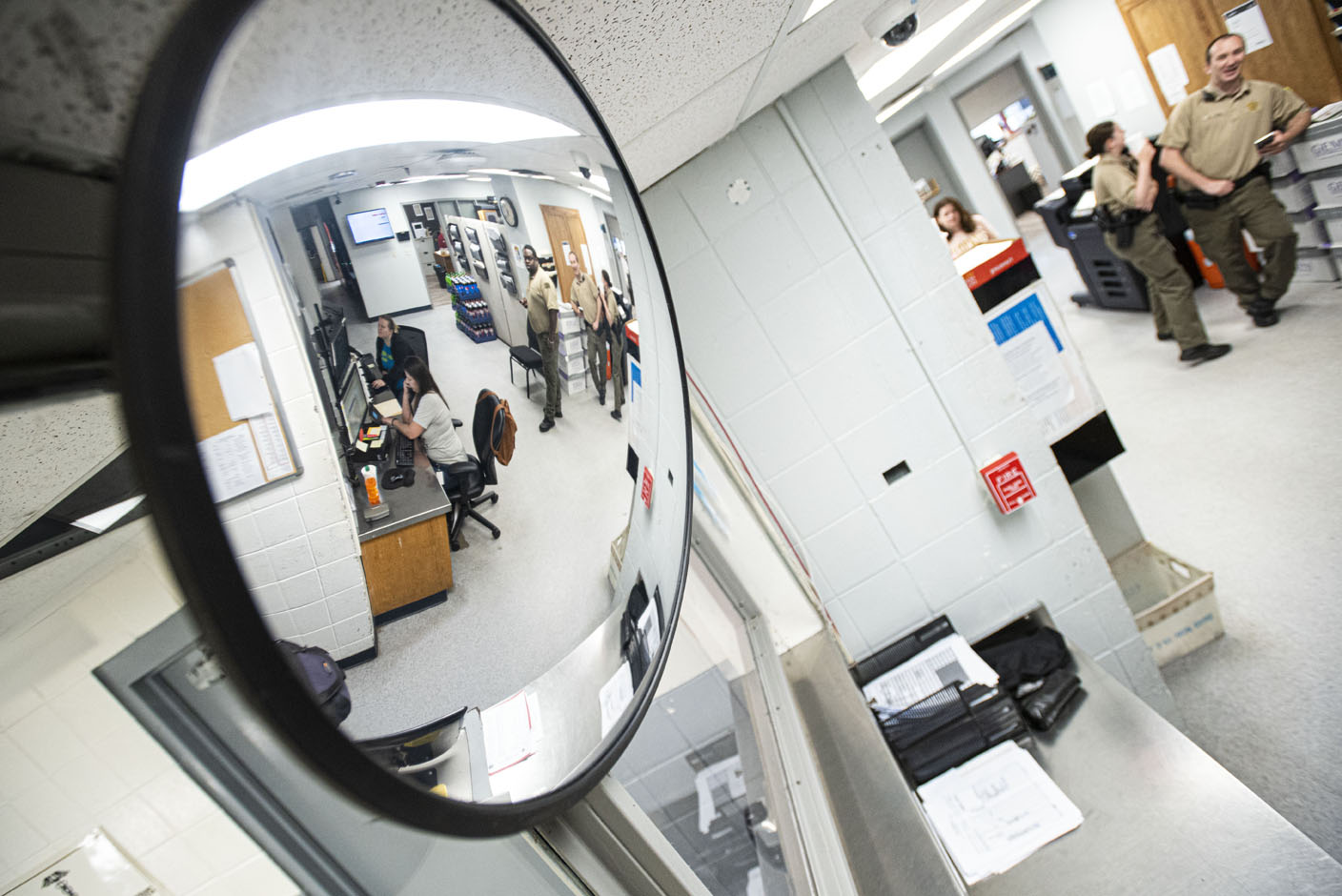 Deputies and other employees work Friday, May 20, 2022, at the Sebastian County Detention Center in Fort Smith. The Quorum Court on Tuesday discussed recommended uses for the American Rescue Plan money the county has been allocated, including an expansion of the mental health specialty court and creating a sobering center, measures that could help address the issue of crowding at the jail. Go to nwaonline.com/220522Daily/ for today’s photo gallery. (NWA Democrat-Gazette/Hank Layton) 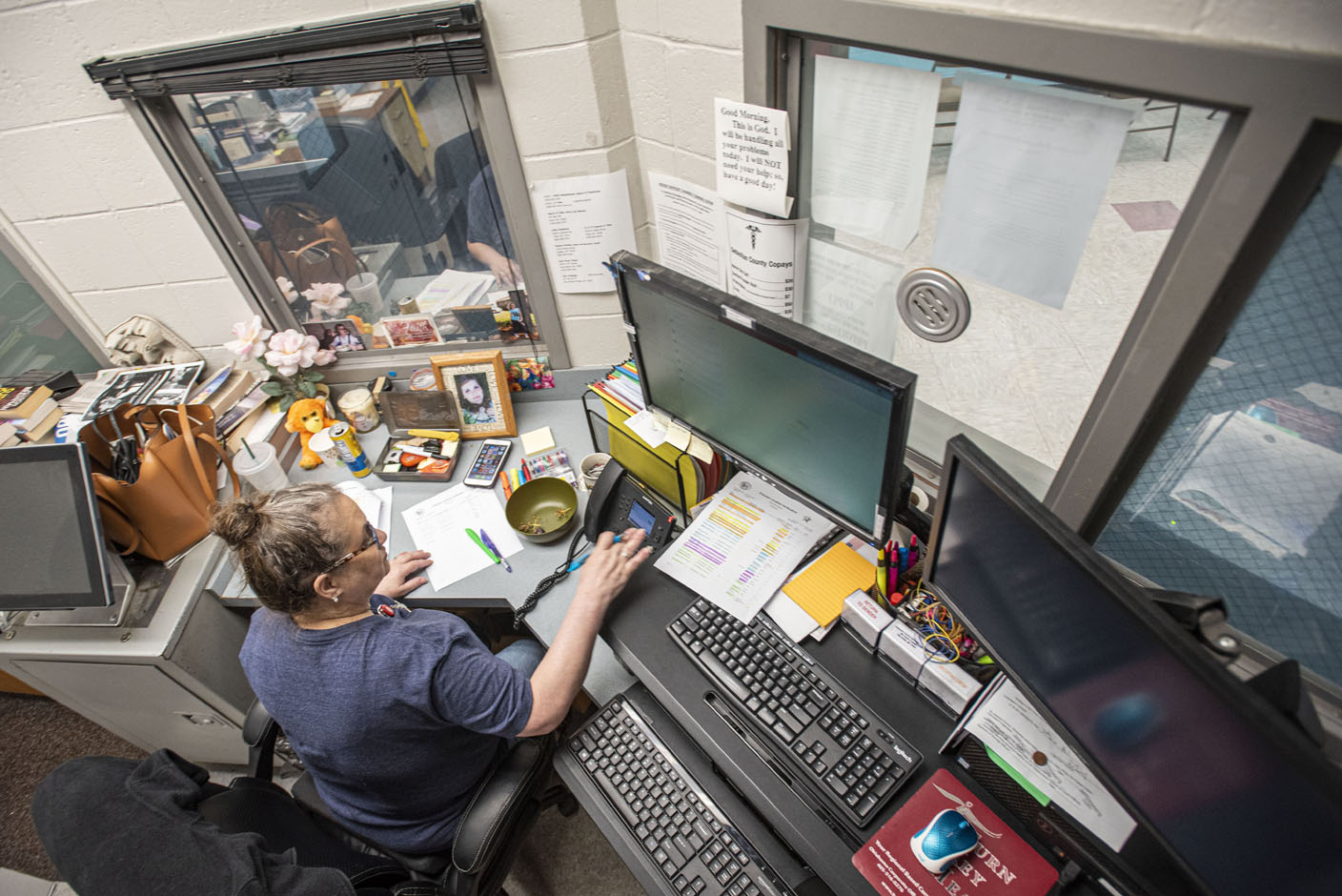 Renee Baker, a visitation clerk, works Friday, May 20, 2022, at the Sebastian County Detention Center in Fort Smith. The Quorum Court on Tuesday discussed recommended uses for the American Rescue Plan money the county has been allocated, including an expansion of the mental health specialty court and creating a sobering center, measures that could help address the issue of crowding at the jail. Go to nwaonline.com/220522Daily/ for today’s photo gallery. (NWA Democrat-Gazette/Hank Layton)