If you’d care to take a last look, it’s still there on Google’s street view, but the house of the future at 4593 Belfort Place is now a thing of the past. The white block with a flat roof and ribbon windows, designed by the prolific Dallas architect Luther Sadler, was a vision of streamline modernity when it was built in 1937, and it remained so until about a month ago, when it was summarily demolished to make way for a larger, more conventional home.

Ho hum, you might say. The erasure of historic architecture in Dallas is a sad commonplace. Although these are difficult economic times for many Americans, the rich are doing extremely well (no matter how much they complain), and that wealth has prompted a wave of construction in the city’s most affluent neighborhoods, often at the expense of older homes, which are deemed either too small or insufficient in their amenities or both.

The razing has reached truly epidemic proportions in the Park Cities, where there is zero landmark protection for even the most significant works of architecture. On a three block stretch of exclusive Beverly Drive, for example, there are five active construction sites, each one marking the destruction of an older home. More than 50 of the residences included in the defining history, Great American Suburbs: The Homes of the Park Cities, Dallas have been demolished since its publication in 2008.

“It’s disheartening if you look back and see all the astounding residences that have been demolished,” says Willis Winter, who co-authored the book with Virginia McAlester and Prudence Mackintosh. Even the house on the jacket cover, a 1938 French Norman mansion by architect Hal Yoakum, is gone.

Almost inevitably, the new architecture is of lesser distinction, and most seem to be of the “Transitional Modern” variety, a stylistic bastardization in which contemporary detailing (or rather, a lack thereof) is applied on a traditional frame. To drive through the Park Cities is to see countless houses in this idiom, identifiable by whitewashed walls and black-painted shutters, as if yanked from a Pottery Barn catalog.

To combat the epidemic of destruction, the advocacy group Preservation Park Cities is publishing a list of the “Top 100″ historic and architecturally significant homes in Highland Park and University Park. “We want to use the list to gain some traction to get new landmark ordinances passed,” says architect Larry Good, a founding principal of the firm Good Fulton Farrell (GFF) and chair the selection committee.

The group would like the Park City municipalities to adopt three ordinances: A 60-day demolition delay, which would allow advocates time to bring recalcitrant owners to reason; a requirement that any demolition permit be accompanied by a building permit, to stop the clearing of sites by speculators and the destruction of homes to create enlarged lawns (both persistent issues); and a tree ordinance requiring the preservation of any tree over 24 inches in diameter not within the footprint of the new residence.

The essential weakness of the proposed ordinances, none of which would block a determined demolisher, suggests the difficulty of passing any protective legislation in the conservative Park Cities, where property rights are sacrosanct.

And yet, the proposed legislation might have saved O’Neil Ford’s Penson House of 1954, a 9,800 square foot example of the architect’s distinctively Texan modern language. It was razed in 2016 by auto dealer Lute Riley, who then sold the prime lot on Armstrong Avenue for a profit. Bitter irony: its replacement, designed by Bernbaum/Magadini Architects and now rising, is much in the spirit of Ford’s original — and so, a needless loss.

The modern architecture of the midcentury is particularly vulnerable, due to its modesty in both scale and presumption, but even the grandest homes in the most traditional of styles are subject to destruction. “The wealth has gotten so great people think nothing of scrapping what’s there,” says Good.

It is an obscene trend: mansions being torn down to be replaced by even larger mansions. Its beginning might be pinpointed to 2017, when the financier Andy Beal ordered the demolition of the former Trammel Crow residence, a 105-year-old, 10,000 square foot Tudor mansion designed by C. D. Hill, architect of the former Dallas municipal building on Harwood Street. Beal had purchased the Turtle Creek property for more than $50 million, only to replace it.

Were they still standing, both the Penson and Crow houses would have been locks for Preservation Park Cities “Top 100″ list. Actually, it is now a “Top 99″ — the recently demolished home on Belfort Place was among those selected, as one of just three (now two, alas) remaining streamline moderne homes in the Park Cities.

Though the houses on the list are unranked, a “Top 10″ is identified. Among those Included in that group are the sprawling 1927 Mediterranean mansion built for Highland Park developer Hugh Prather; the 1933 Elbert Williams House, designed by David R. Williams and considered the progenitor of Texas regional modernism; and the 1958 residence designed by the modernist Scott Lyons for Texas Instruments founder Eugene McDermott and his wife Margaret McDermott.

Also included are four houses on the facing corners at the intersection of Shenandoah and Douglas streets, all designed by the idiosyncratic Dallas architect Charles Dilbeck. (The group, known as the “Tour Corners,” is counted as a unit on the list, meaning the “top 10″ is in fact a top 13.) “Those four houses are such an incredible exclamation point for him in his career,” says Winters, who is at work on a monograph on Dilbeck.

Other Dilbecks have not fared so well, including a run of 20 houses on Bryn Mawr Drive designed for the developer Sam Lobello. “I almost hate to drive down the street because they’re disappearing so fast.”

To qualify for the list, houses were deemed to be an essential work by a “revered” Dallas architect; exemplary in architectural style; early for its type or innovative in its design; one of the last of its particular type; associated with a prominent family or historical event; a part of a notable group or district; or set in an important landscape. All houses on the list are at least 50 years old (the cutoff being 1972), which suggests it will require constant revision.

Being selected by a committee chaired by an architect, the list has a certain predilection for the houses architects built for themselves, which tend to be modest in scale (architecture not being among the most remunerative of professions) but of special character. Among the notable architects with listed houses are George Dahl, Herbert Greene, C. D. Hill, Anton Korn, Mark Lemmon, and Hal Thomson.

That list might also include the residence of Loula Gray. Though not trained as an architect, her interest in the field came naturally. Her father, Thomas William Griffiths, was proprietor of a firm that sold lumber, roofing, and other building supplies. In 1913, she designed a home for herself and her husband, Frank Mitchell Gray, on Gillon Street. (The house is sometimes erroneously referred to as the Mrs. Frank Mitchell House.) According to Homes of the Park Cities, it is the oldest unmodified house in Highland Park, a testament to the intelligence of its unique design, which is distinguished by a large screened porch, hemispherical wing with bay windows, and distinctive triple-pyramid roofline.

Among the most charming houses on the list is a Mediterranean duplex on Westway Avenue, designed in 1933 by Fooshee & Cheek (architects of Highland Park Village). It is the most inventive of the (relatively) affordable two-family homes on the blocks adjacent to what was then a rail corridor and now the route of the Dallas North Tollway. It is one of a diminishing number that remain intact as duplexes. “They convert very nicely,” says Good.

Perhaps you are unmoved by the plight of architecture in the Park Cities. Preservation has become a dirty word in our polarized culture. It is difficult to engender public sympathy on the left for houses built for those of extreme (or even modest) wealth. Progressives, with some justification, see preservation as a tool, either inadvertent or not, of exclusion, of preventing new, more affordable housing for diverse population. For many on the right, preservation is an infringement on personal freedom.

In this toxic, dogmatic mix, architecture, landscape and history are caught in the crossfire. It would be nice if we could just stop the shooting.

The 10 most significant houses in the Park Cities

An expert committee designated by Park Cities Preservation selected the 100 most architecturally and historically significant houses in Highland Park and University Park. The following are the top 10 residences on that list, which were not ranked in order.

3805 McFarlin Blvd., David R. Williams, architect, 1933. Perhaps the most influential home in Dallas, this house for Elbert Williams was the model of what would become Texas regional modernism.

4606 St. Johns, the Oglesby Group, architects, 1964. Among the finest homes by Dallas modernist Enslie “Bud” Oglesby, a two-story band with a limestone base (for service) and a glassed upper level fronted by a screen of shutters.

4101 Beverly Drive, Hubbell & Green, architects, 1912. One of the earliest houses in Highland Park, with a facade modeled on Brunelleschi’s Pazzi Chapel.

3925 Potomac, Hal Thomson, architect, 1921. Thomson’s own home, a relatively modest colonial built by the architect known for his elegant mansions.

4200, 4201, 4144, and 4145 Shenandoah Street, Charles Dilbeck, architect. The so-called Four Corners; a quartet of houses (a Tudor, a ranch, and two French Normans) facing each other at the intersection of Shenandoah and Douglas streets, all designed by Dallas architect Charles Dilbeck between 1935 and 1936. 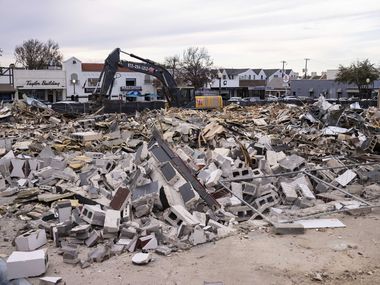 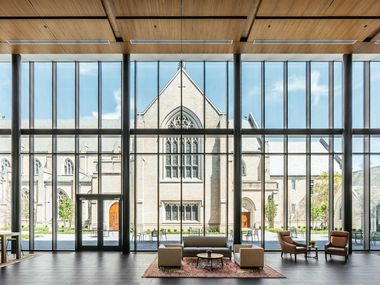