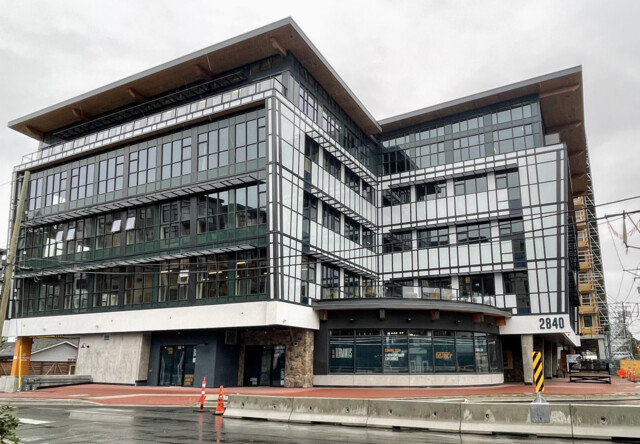 Penticton-based mass timber manufacturer Structurlam has celebrated a major success this week with the opening of its latest development on Vancouver Island with innovative new earthquake safety measures.

In partnership with Design Build Services and Aspect Structural Engineers, Structurlam provided all the mass timber for the five-story “Terminus at District 56” in Langford, a mix of retail and commercial spaces.

The building contains the first buckling-restrained braces housed within a timber frame, especially important given the active seismic zone where it is located.

“The Terminus project sets a high precedent for mass timber construction and meets a variety of structural considerations, including fire ratings, seismic benchmarks and structural performance, all while providing the desired aesthetic,” said Hardy Wentzel, CEO of Structurlam.

“The completion of the building is a big win for all involved.”

Next door, a project called Tallwood 1 is underway, a 12-storey mass timber tower built under revised BC Building Codes announced in 2018 that increased the allowed height for mass timber buildings.

Structurlam describes its economic benefit as offering the ability to design, model and prefabricate the structural elements of a project offsite, accelerating on-site production schedule compared to traditional on-site building with steel and concrete.

The company has production facilities in Okanagan Falls, Penticton, Oliver and in Conway, Arkansas in the U.S.