If you’ve walked around the U.S. Department of Energy’s Fermi National Accelerator Laboratory site recently, your interest might have been piqued by a sprawling new addition next to the lab’s iconic, 16-story Wilson Hall: That shiny glass façade is the hallmark of the new Integrated Engineering Research Center, one of the cornerstones of Fermilab’s sustainability push across the lab.

Once fully built, the IERC will be the largest purpose-built laboratory and office building at Fermilab since Wilson Hall was completed in 1974. At 80,000 square feet, the IERC has been in the making for nearly 10 years now. Construction will be completed soon. 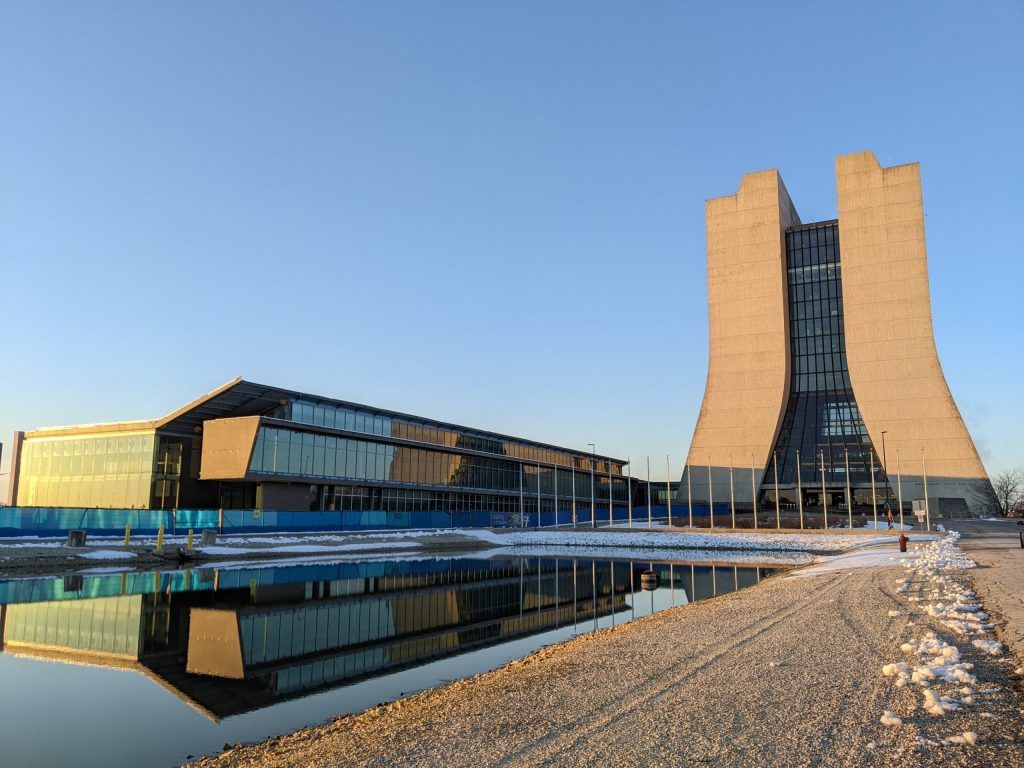 The architect’s design concept for the roof of IERC to mimic the shape of Wilson Hall (rotated 90 degrees) is evident in the pond’s reflection. Photo: Brian Rubik, Fermilab

The IERC was conceived out of Fermilab’s campus master plan, which has a set of guiding principles: Sustainability and stewardship are two of them. Andrew J. Federowicz, senior architect at Fermilab, contributes to the lab’s Sustainability Management Team as the sustainable buildings goal owner for the lab.

Federowicz explained that the concept behind the IERC building was to relocate engineers and technicians from scattered facilities spread out across the site to a new, state-of-the-art facility located in the core campus with direct access to Wilson Hall and scientists.

Part of Federowicz’s role is to oversee the lab’s progress toward meeting federal sustainable requirements and goals for new construction. This means getting involved with projects like the IERC early on in the design phase to help establish sustainable goals and help track progress toward those goals throughout construction and project completion.

The federal government has developed a robust series of checklists for assessing compliance in new construction and existing buildings. “My job is to monitor and make sure that we’re tracking the metrics toward achieving these guiding principles,” said Federowicz.

The IERC will build Fermilab’s momentum toward its green goals.

The benchmarks in place have a twofold purpose: to use building systems and design to counter climate change and to increase climate resiliency of the built environment as weather events become more severe or unpredictable.

There are many ways Fermilab is working to accomplish these goals, including the use of practical building designs. For example, the landscape plan for the new building exclusively utilizes native plants, according to Federowicz. Using them means the facility does not need an irrigation system and is simultaneously more drought-resistant.

The IERC also employs a host of different passive strategies in its green quest. Overhangs built into the façade block out direct sunlight that would heat up the building’s interior; in turn, this helps reduce cooling costs. Horizontal light shelves built into the walls reflect daylight into deep spaces of the open office. Large clerestory windows, which are placed high above in a room, also help natural light penetrate farther into those interior spaces. These built-in design elements reduce the need for artificial light or heating, helping ensure the lab can be less energy-intensive.

The IERC is home to an extensive green roof at around 20,000 square feet. While it looks aesthetically pleasing from the lofty views of Wilson Hall, the green roof also allows the building to blend in with the surrounding landscape, manage rainwater flow and control the distribution of water going into the storm water sewer.

The IERC will build Fermilab’s momentum toward its green goals. “I think the completion of IERC will raise the bar further for sustainable stewardship at Fermilab,” Federowicz said.

Fermi National Accelerator Laboratory is supported by the Office of Science of the U.S. Department of Energy. The Office of Science is the single largest supporter of basic research in the physical sciences in the United States and is working to address some of the most pressing challenges of our time. For more information, please visit science.energy.gov.