The green activists have been going from one village to another, conducting awareness meetings to explain the amendments to the general public, and have offered to guide panchayat bodies to draft their resolutions opposing them. 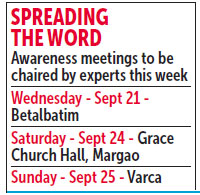 At a meeting at Benaulim which drew a large crowd, architect Elsa Fernandes spoke about the impact that the amendments will have on agricultural land and forest areas. “The entire amended Act is to benefit the builders’ lobby, and is dangerous in nature as the provisions are made in such a way that construction activities get a free hand,” she said. Environmentalist Peter Fernandes said that the State’s elected representatives should raise their voices to oppose the new Jetty Policy, rather than get embroiled in unethical politics.  “It is sad to notice not a single political leader has announced any plans to take to the streets to oppose these dangerous amendments,” he said.

Environmental activists like Claude Alvares, Abhijit Prabhudessai and Sebastao Rodrigues are set to address several meetings across Goa during the coming week.