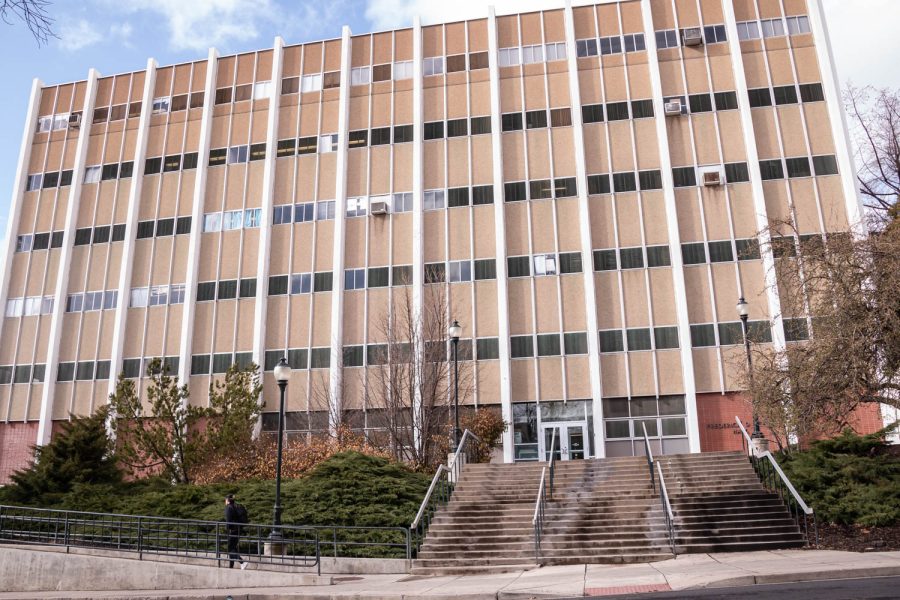 A student walks past Heald Hall on April 4.

WSU Facilities Services received the go-ahead to start planning Heald Hall’s demolition and the building that will replace it.

Heald Hall, known as the biological sciences building, houses various labs and classrooms. However, due to the aging of the building, WSU has had the demolition on its wishlist for a while, said Phil Johnson, Facilities Services project manager.

“The College of Arts and Sciences has a desire to create a new facility that’s a little more state of the art, that can accommodate some of their programs,” Johnson said.

WSU is trying to upgrade or demolish older buildings that have serious maintenance issues,  with Heald Hall next on its list, he said.

At the moment, this project is at the pre-design stage, but the goal is to have a more upgraded, brand new sciences building that will replace Heald Hall, Johnson said. The new building will have labs and classrooms, but the exact makeup and program of the space are still being developed.

There are many professors who use Heald Hall every day for class or offices, including Erica Crespi, School of Biological Sciences associate professor.

Crespi said she teaches labs and has a research lab in Heald Hall. She has worked in Heald since January 2011 and was happy to learn about the demolition when it was announced this year.

For Crespi’s research, she used to house amphibians in Heald Hall, but because the building did not meet the standards to keep them there anymore, she moved them to neighboring Eastlick Hall.

“There are several things about that building that I will not miss. The heating and air systems are old and there’s leaks in the windows,” Crespi said. “It’s just time to move.”

There is no set date for the demolition because of the pre-design stage and state budget, Johnson said. Before the actual demolition, faculty will have to relocate to neighboring science buildings.

“Maybe five-ish years is when Heald would be down and the new building construction would be on the horizon,” Johnson said.

In terms of the cost, Johnson said it will be significant because demolishing a large building and then constructing a new one are expensive projects.

“It’s all contingent on the state capital budget. When we ask for money on this type of thing we need to get approved for it,” Johnson said.

Throughout the planning of the new building, faculty members who are in Heald Hall have been getting some updates on the process, Crespi said.

“We are going to hear from that pre-planning committee at the end of the year to kind of hear what they have been thinking about,” she said. “We have been kept up to date by our chair, Pat Carter, on what’s been going on. But we know it’s years out.”

The team that is working on the pre-design is working very closely with the departments in the College of Arts and Sciences that work in Heald Hall to decide the best fit for the new facility, Johnson said.

Crespi said she is happy that the demolition is on the docket for renovations so the new building can be built.

“When we move out of our research labs and our teaching labs, I look forward to more modern facilities,” Crespi said.