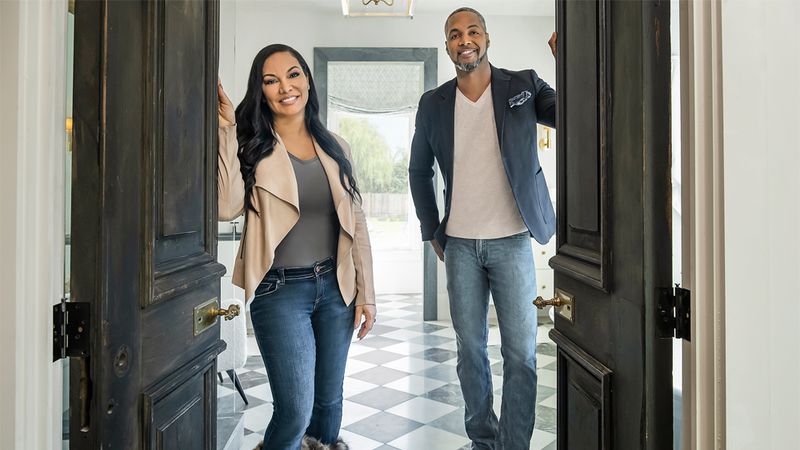 “It wasn’t about the show per se. It was bringing our businesses together. It just transformed into a show,” said Jackson, a former DJ. He owns family-run Jackson Draper Renovations and she runs Egypt Sherrod Real Estate Group and Design and they will eventually become a single entity.

“We fell in love renovating a property in Newark, New Jersey, on a rooftop when my foot went through the roof because I thought I could tar a roof myself,” Sherrod said. “We’ve been inseparable ever since. We have three girls. It’s safe to say we’ve been working together since day one in some capacity.”

During the opening moments of the first episode, Sherrod noted: “Working with your spouse has its challenges, but we love it. Mike and I are obsessed with finding value in homes and sometimes you find the most value in the ugliest ones.”

Each episode features a couple buying a home. Sherrod helps them find a fixer-upper at a lower price and the couple renovates it into what they hope is the client’s dream home. In the first episode, a couple coming from New York has a budget of $650,000 so Sherrod seeks a house around $550,000, leaving cash for fixes.

“Many people are faced with buying homes they have to renovate,” Sherrod said. “You’re seeing that more often than not to get into particular neighborhoods.”

The couple looks at two appealing mid-century style homes in Dunwoody and Brookhaven. They quickly opted for the Dunwoody house for $570,000. Sherrod and Jackson have six weeks and $100,000 to make it work. They redo the kitchen, open the space, install new flooring, fix up the den and remodel the fireplace. Despite a few minor snafus, they manage to finish on budget and on time.

“We wanted everything to marry together and flow so every room where you turn invited you in,” Sherrod told the couple after they entered the renovated home.

The first big reveal is the den and Jessica, one of the new buyers, gushes: “Oh my God! It looks so good. The paneling is still there. I’m still getting my mid-century vibes. but everything is so beautiful and bright and modern!”

The brick home in 35-year-old Brookhaven Sherrod and Jackson were working on in December was purchased by a young couple in May for $495,000. They were adding a stairway upstairs. “The potential for equity here was phenomenal,” Sherrod said. “You can add another three bedrooms upstairs. They are doing it in phases.”

“They are putting $120,000 into the renovations. By the time the couple invests in the upstairs,” Sherrod said, “with comps in the neighborhood, the house could be valued over $1 million.”

Sherrod said she had been approached to do “Real Housewives of Atlanta” but didn’t find that appealing. “It just wasn’t for us,” she said, “but this is for us because this is our truth.”

Debuting at 9 p.m. Thursday, Jan. 13 on HGTV, available the same day on Discovery+