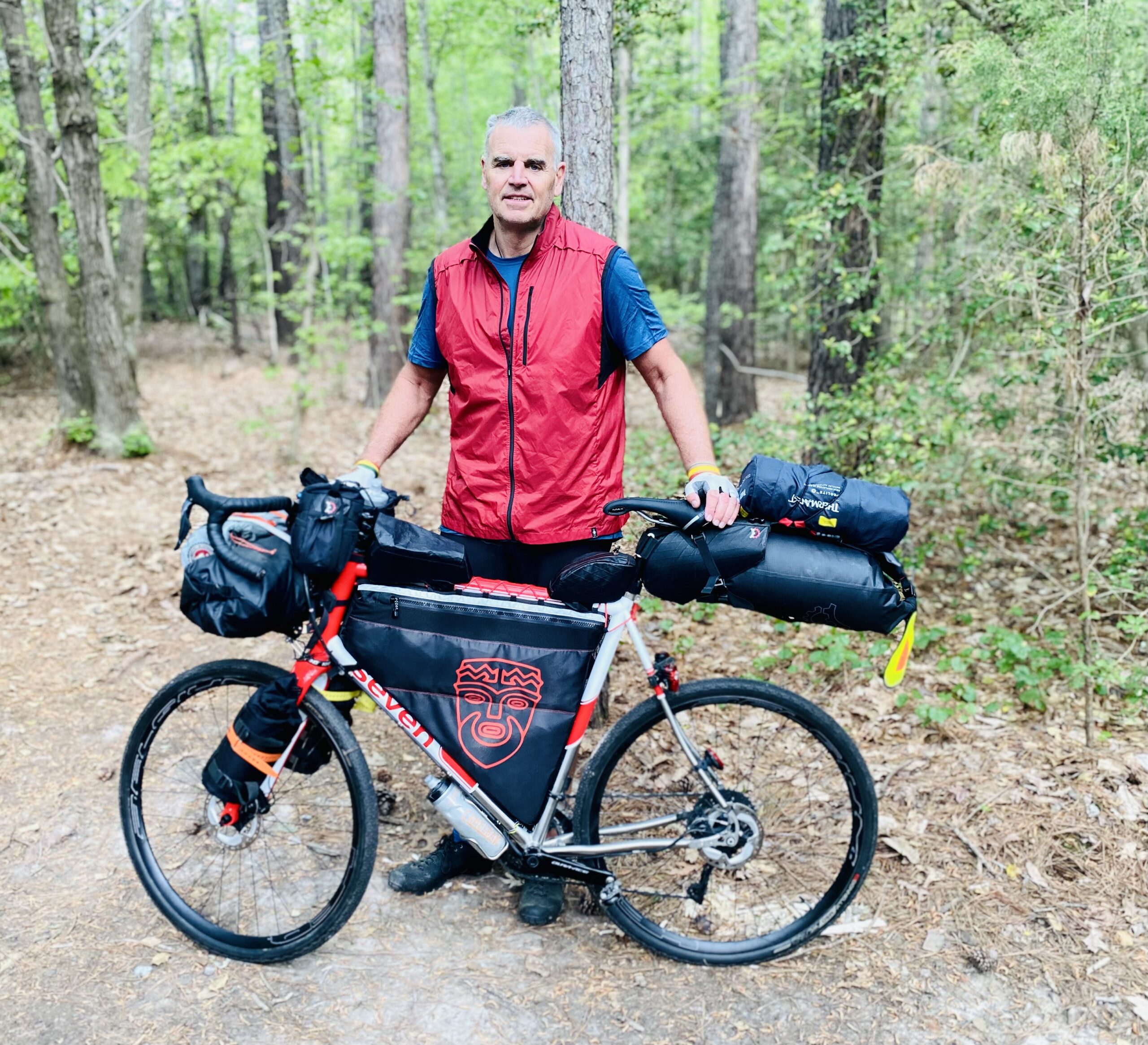 Dan Schmitt with the loaded-up bike he’ll be riding coast-to-coast on his Kon-Tiki Challenge ride for Sportable. (Images courtesy of Cindy Schmitt)

When Dan Schmitt retired in December after 33 years with HHHunt, the longtime executive celebrated the occasion with a retirement gift to himself: a customized Seven Cycles Evergreen SL gravel bike.

The outgoing president and COO had been an avid cyclist for as long as he was with the real estate development and homebuilding giant. But this specific bike was for a ride he’d been planning for some time, and for a cause that’s become close to his heart.

This weekend, the 62-year-old is embarking on his Kon-Tiki Challenge, a 4,500-mile “bikepacking” ride that Schmitt is attempting solo and unsupported to raise awareness and funds for Sportable, a Richmond nonprofit that provides sports opportunities to people with physical disabilities.

Schmitt is a volunteer with the cycling program for Sportable, where his wife Cindy works as development director. The coast-to-coast ride — inspired by and named for the Kon-Tiki expedition that six men achieved by raft in 1947 — aims to raise $100,000 for Sportable through donations and registrations for virtual rides.

Cyclists of all levels and abilities are encouraged to log their own miles to complete virtual segments of Schmitt’s ride, which starts Saturday on the coast of Washington state and will follow the Northern Tier bike route along the U.S.’s northern border. 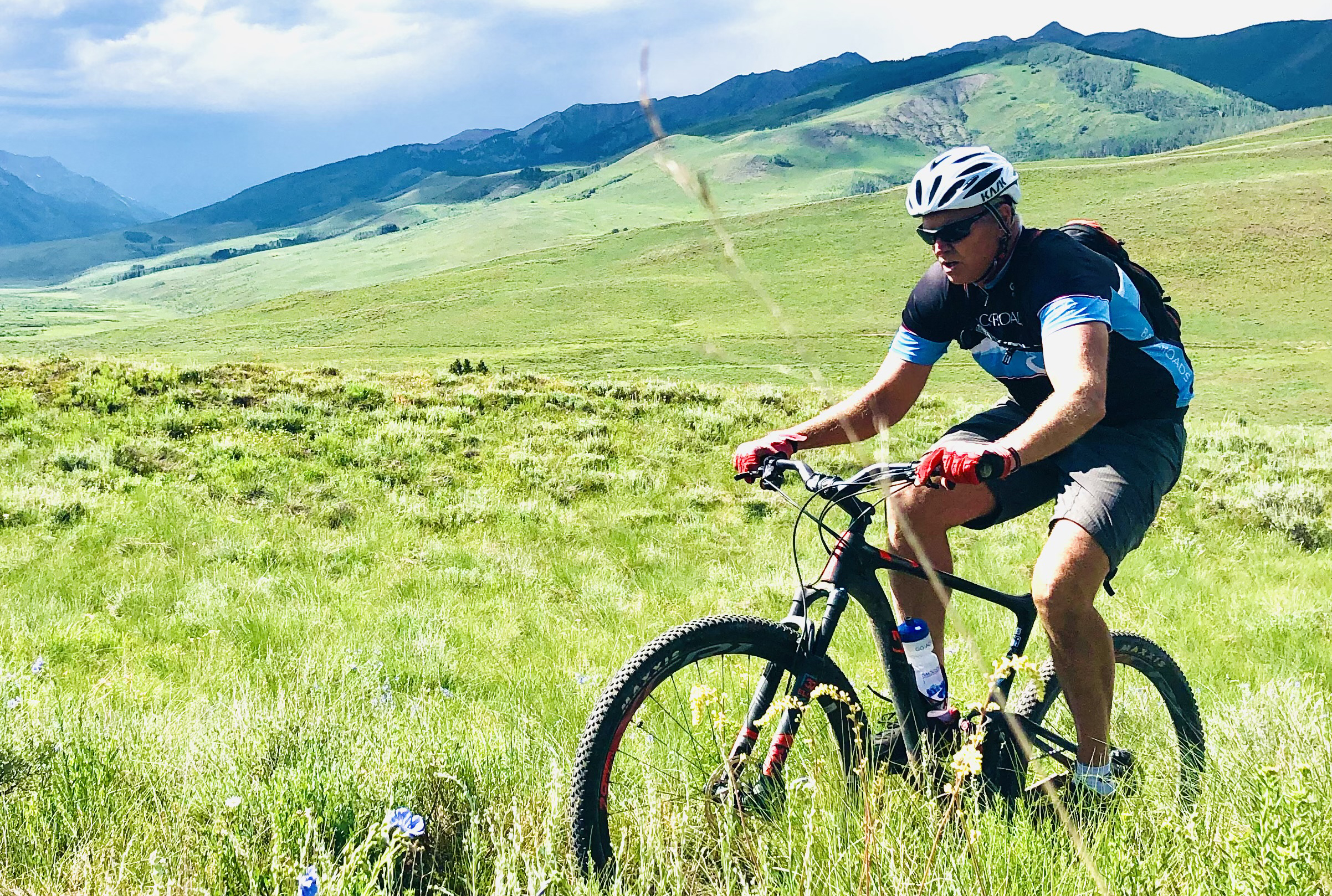 Schmitt is aiming to reach the end of the route in Maine in 100 days, the same amount of time it took the Kon-Tiki expedition to reach the Polynesian islands from Peru.

Schmitt said he learned of Kon-Tiki — said to be an old name for the Inca sun god Viracocha — from the 1948 book that chronicled the feat. The tale planted the seeds for the cross-country trek that Schmitt has been planning to take him into the next chapter of his life.

“I love to ride my bike, I love to meet people and I love to travel and see places, so this combines all of that,” Schmitt said in a recent interview. “And it should be a pretty challenging endeavor. I like big projects, and this is kind of a big project.”

“With HHHunt, the bigger the projects, the more complex, the more challenging, the more I enjoyed them,” he added. “This is just a different kind of project. But it involves a lot of the same stuff: a lot of planning, a lot of collaboration, the risk.”

While the ride is by far the longest he’s attempted, Schmitt has been building up to it over the years, participating in endurance races and long-distance rides. He said he’s done a few short bikepacking trips, multiday, mixed-terrain rides that combine cycling and camping. He said he also once rode from Richmond to an HHHunt meeting at Smith Mountain Lake. 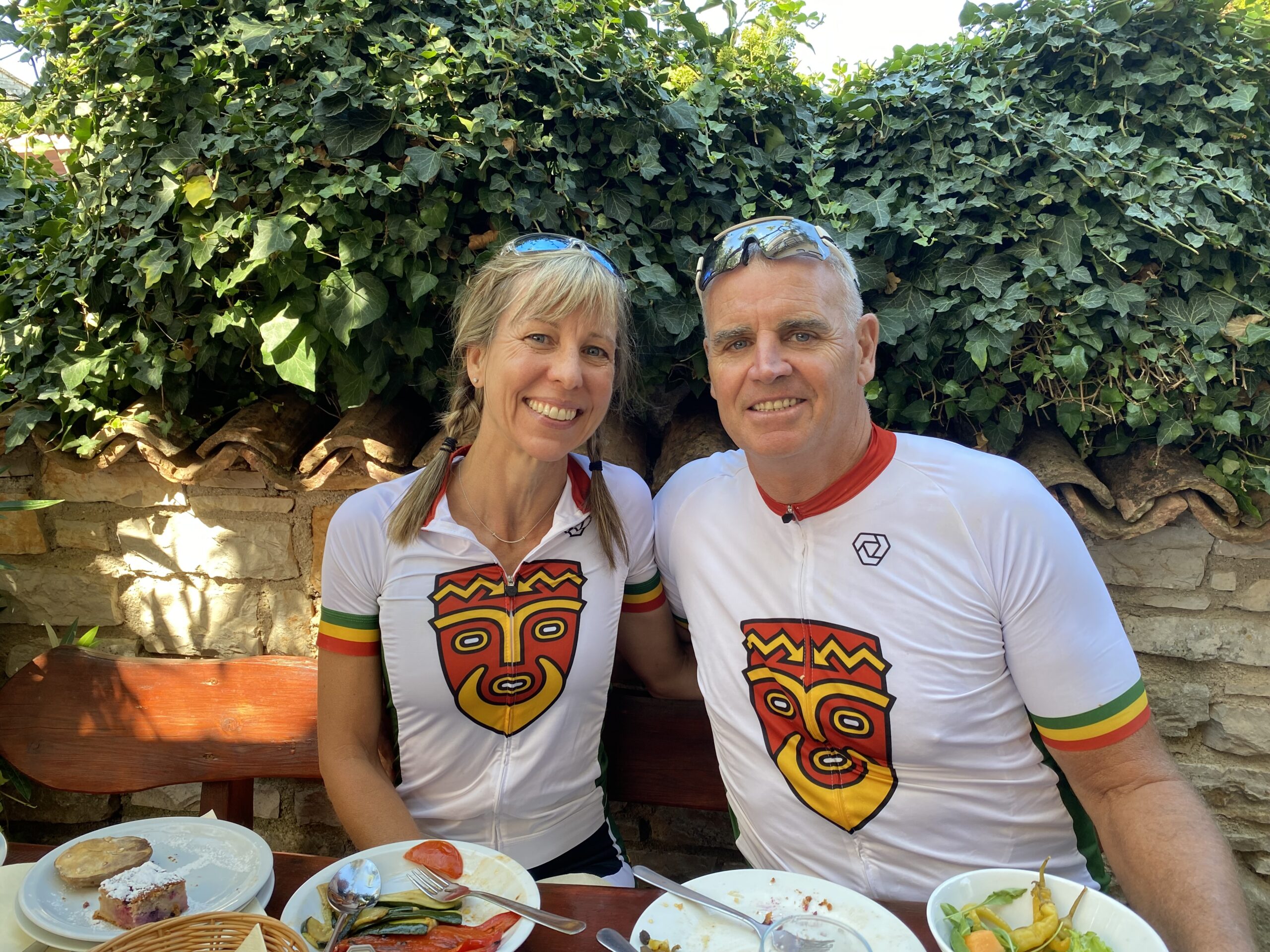 “I’ve always liked to push. I started out mountain biking, but then when they introduced the enduro category, which is like a six-hour race, it was like: that’s what I want to do,” he said.

“I can go slower, but I can go longer and just kind of push myself. I think you find out a lot about yourself when you push yourself to your limits, or sometimes past your limits.”

Riding solo, Schmitt will be unassisted while attempting 60-65 miles a day. That’s nearly the distance to Charlottesville, every day, for just over three months.

He’ll be camping at night, at campgrounds or his own makeshift ones as needed. Schmitt said he’ll also be using apps like Warmshowers and Hipcamp to find people who provide properties for outdoor stays and cycling assistance.

Friends and family members will join him on his ride here and there. A family reunion is planned when he rides through his hometown of Little Falls, Minnesota, around the Fourth of July. 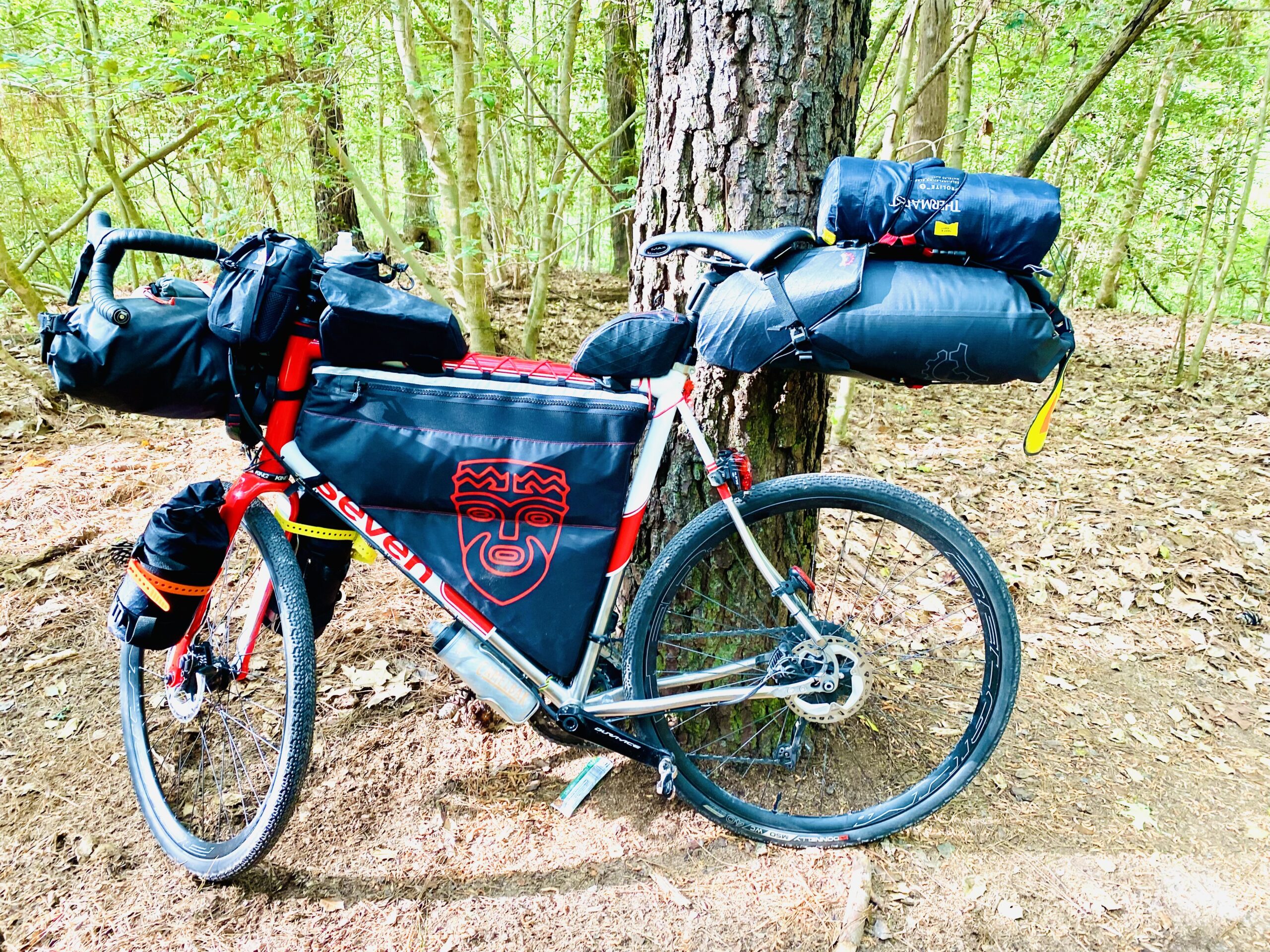 But otherwise, Schmitt will be alone with his thoughts and fending for himself if any difficulties arise.

“That’s kind of the appeal of it for me: going into the unknown and just knowing I’ve got to figure it out,” he said. “For 40 years in my career, I’ve had this massive, busy schedule with a lot of staff and a lot of people, so I’ve had a lot of support in my career. Now this is a chance for me just to go figure it out, whether it’s mechanical problems or weather or navigation or whatever.”

“I’ve done a lot of camping and adventure races, and it’s the hard stuff and the problems that actually you remember more,” he added. “It’s not the beautiful sunset you saw; it’s your two flat tires and what you did to figure it out. That’s going to be the fun part.”

As for the solitude he’ll have on his bike, Schmitt said he’s looking forward to it but acknowledged it could be challenging.

“It could be, but it also could be very transformative, just processing the last 40 years of speed and activity and just really thinking about who I am and what’s important going forward in my life,” he said. 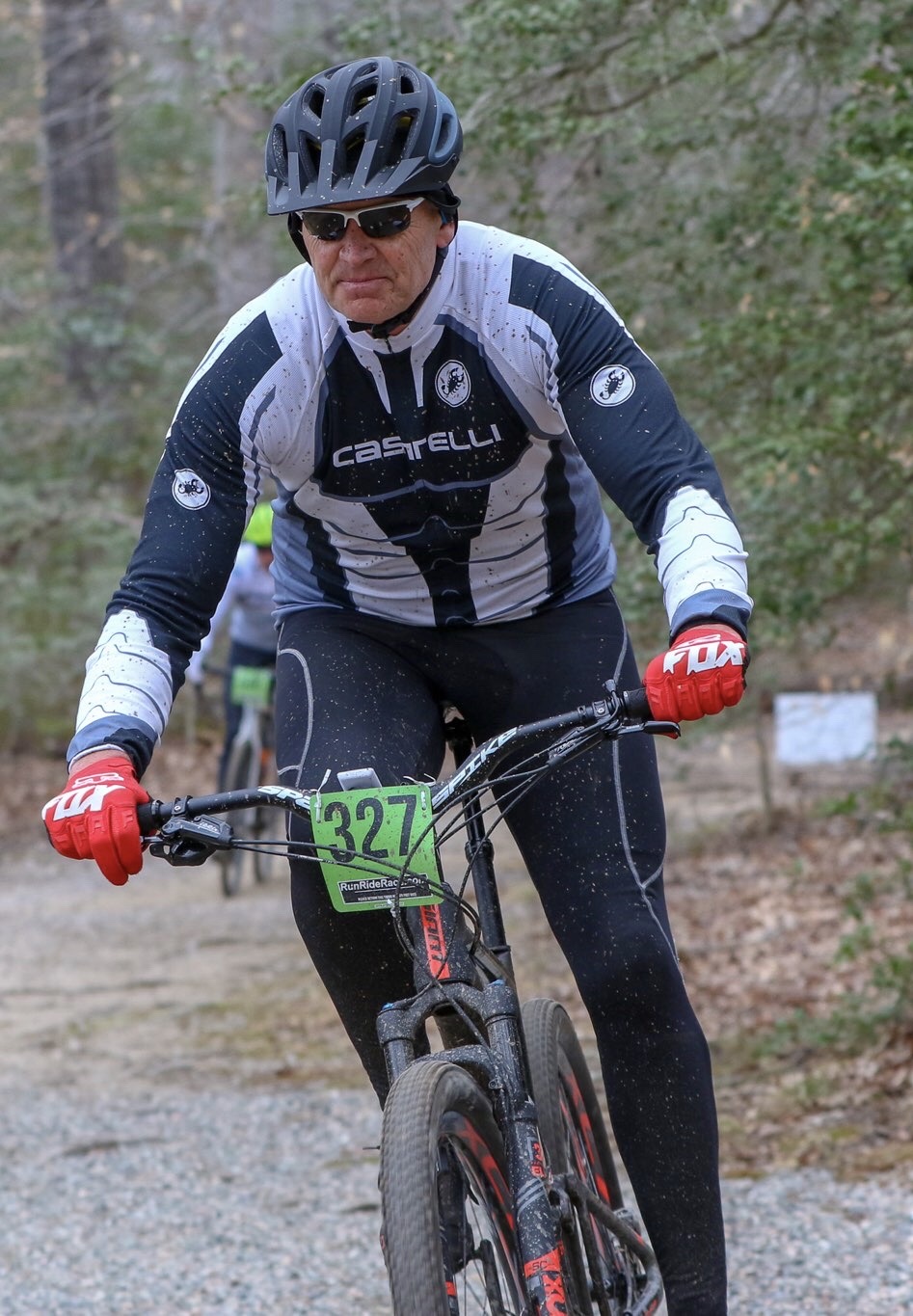 Schmitt competes in bike races in addition to his solo rides.

Along with customized mounts for his various gear bags, one of which sports the Kon-Tiki symbol from the raft’s sail, Schmitt’s titanium-framed bike is equipped with a dynamo hub USB charger that’s powered by the motion of his front wheel and will keep his phone and devices charged.

As for his camping equipment, he’s packing only a sleeping bag and mat, a camp stove for cooking food he’ll buy along the way, a few changes of merino-wool clothes, and a two-person tent big enough to fit Schmitt’s 6-foot, 7-inch frame.

Schmitt’s route will take him over two mountain ranges on both coasts: the Cascade Mountains and the Rockies, via Glacier National Park, and the Adirondack Mountains and the White Mountains in Vermont and New Hampshire. In between, he’ll cross the Great Plains via Montana, North Dakota and Minnesota; circle above Lake Michigan into Ontario, Canada; and hit Niagara Falls before finishing in Maine.

Schmitt will be documenting his journey on Instagram, using the handle @KonTikiC2C. Registrations to participate in the fundraiser’s virtual rides are $35 each and can be made on Sportable’s Kon-Tiki Challenge webpage. 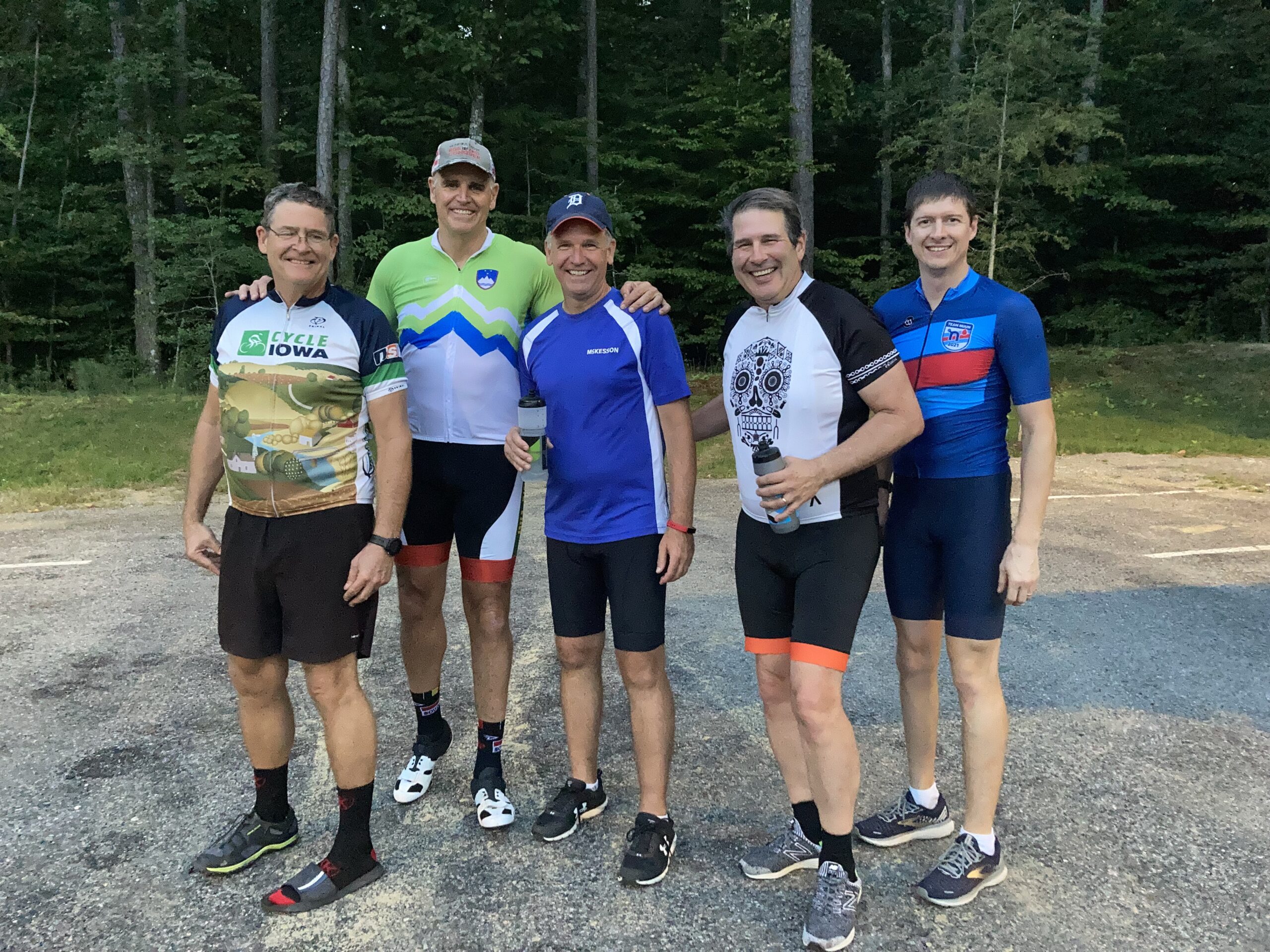 Schmitt with cycling athletes he volunteers with through Sportable.

While the ride will be an achievement for him personally, Schmitt said it’s as much about supporting Sportable and raising awareness of its work. Led by Executive Director Hunter Leemon, the 17-year-old nonprofit serves hundreds of athletes and non-athletes in 18 sports, Schmitt said.

“I started volunteering with the cycling program, and it’s so amazing just to see how happy and excited these athletes are to have this chance to be active and to participate,” Schmitt said. “I know how much it means to me to remain active and be able to do things. So to be able to help them stay active too, it’s just very rewarding for me to be involved in that.”

Now an instructor at Reynolds Community College, where he teaches intro to business classes, the JMU grad with an MBA from Randolph-Macon said he continues to see benefits of cycling in his work, as he did in his years at HHHunt.

“For me, cycling has just kept me very inspired, very motivated, very driven,” he said. “I’m always looking forward to the next ride or event or race. It’s just helped me be motivated and be motivational to people.”

This is the latest installment in our Downtime series, which focuses on business people’s pursuits outside of the office. If you, a coworker or someone you know around town has a unique way of passing time off the clock, submit suggestions to [email protected] For previous installments of Downtime, click here.