The Dominican Republic‘s government recently announced the commencement of Punta Cana International Airport‘s USD280 million expansion project. The initiative includes the construction of the 265,518sqm Punta Cana Free Trade Zone logistics centre and the expansion of Terminal B to 25,000sqm.

Punta Cana is claimed to be the most highly visited Caribbean vacation destination.

The logistics centre will include a cargo hub, MRO facility and fuel production capabilities, while the expanded terminal will feature seven gates with aerobridges, with capacity to handle three million passengers per annum. USD80 million is earmarked for the terminal’s expansion, with completion scheduled for Nov-2022.

Collectively the terminal expansion and the construction of the logistics centre are expected to generate 7,000 new jobs.

In a speech delivered at the airport President Luis Abinader Corona repeated a previous call to national and foreign investors to invest in the Dominican Republic generally, and affirmed that the government would “support projects that improve the quality of life of all Dominicans, as long as they respect the laws and the Constitution of the country.” It is not known exactly what was meant by that ambiguous comment, but the country has suffered from drug traffic and money laundering-related corruption in recent years, with some government officials implicated.

He pointed out that record investments were arriving in the country, and that with this new project “we are at the forefront of the logistics sector…this is one of the most important infrastructure works and will project the Dominican Republic as a first-class international logistics hub”.

Punta Cana is regarded as “the first private commercial airport in the world”, meaning that it is operated by Grupo PUNTACANA – a partnership created to construct a resort and real estate community.

The PUNTACANA Resort & Club has grown to encompass over 26 square miles (42sqkm) and latterly includes Punta Cana International Airport under a build-operate-transfer concession.

Before these projects the last major expansion was undertaken at the airport to add modern technology and improve facilities from 2009 onwards, when a new check-in section of Terminal 1 was completed.

In 2011 the airport opened its new 10,170ft runway, with the same proportions as the existing one, and control tower with other works, including the expansion of existing taxiways and the construction of a new taxiway.

The Minister of Industry and Commerce, Ito Bisonó, said: “What begins today is the result of a great vision of years of work by the Punta Cana Group, which has met an administration (that is) devoted body and soul to making the right decisions, without bureaucracy, generating the confidence, national and international, of investors who see the Dominican Republic with new eyes”.

He added that this logistics centre will take advantage of the connectivity that exists today with some 300 cities in the world connected from the Punta Cana International Airport, with a Free Zone, an aircraft repair and maintenance centre and a fuel centre.

The Punta Cana Free Trade Zone (PCFTZ), from its Air Logistics Centre, will handle import, export, trans-shipment and parcel cargo on a 265,518sqm site and 75,000sqm of construction, thereby consolidating the process of cargo operations on passenger aircraft. It will have a ‘Free Zone Park’ that will promote the manufacturing industry.

The president and CEO of the Punta Cana Group, Frank Elías Rainieri, expressed his opinion that the group had been faithful to a commitment to work for the economic and social progress of the country and that it was continuing to consider more such options for the future.

He also added that “Terminal B will be ready to receive the United States Immigration and Customs pre-check service, which we are sure will be approved due to the competitive advantages it offers the Dominican Republic as a tourist and investment destination”.

The US Customs & Border Protection service has 16 preclearance locations in six countries, including Aruba and Freeport and Nassau in The Bahamas. The addition of Punta Cana will give it an advantage over other airports in the region in that it will enable business people to set up there and easily enter the US as required.

A fast growing economy but with marked income inequality

For the past two decades the Dominican Republic has been one of the fastest growing economies in Latin America.

The economy rebounded from the global recession in 2010-16, and the fiscal situation is improving. A tax reform package, a reduction in government spending (hence the president’s entreaty to the private sector), and lower energy costs helped to narrow the central government budget, and public debt is declining.

However, there is still marked income inequality and high unemployment; that and underemployment remain important long term challenges. The poorest half of the population receives less than one fifth of GDP, whereas the richest 10% enjoys nearly 40% of GDP.

To act as a freight hub for the region, arguably Punta Cana is as well placed as is Puerto Rico, the US territory situated next door (only 50km to the east).

The Luis Muñoz Marín International Airport there is also operated privately – in fact as a PPP – by Aerostar Holdings, and there are numerous free trade zones already in place there, so stiff opposition can be expected.

The fact that one of a country’s main airports can not only be privatised (the Santo Domingo Las Americas International Airport is, also, to VINCI Airports) but to an organisation whose sole modus operandi is tourism and real estate, is indicative of how important tourism is to the Dominican Republic. 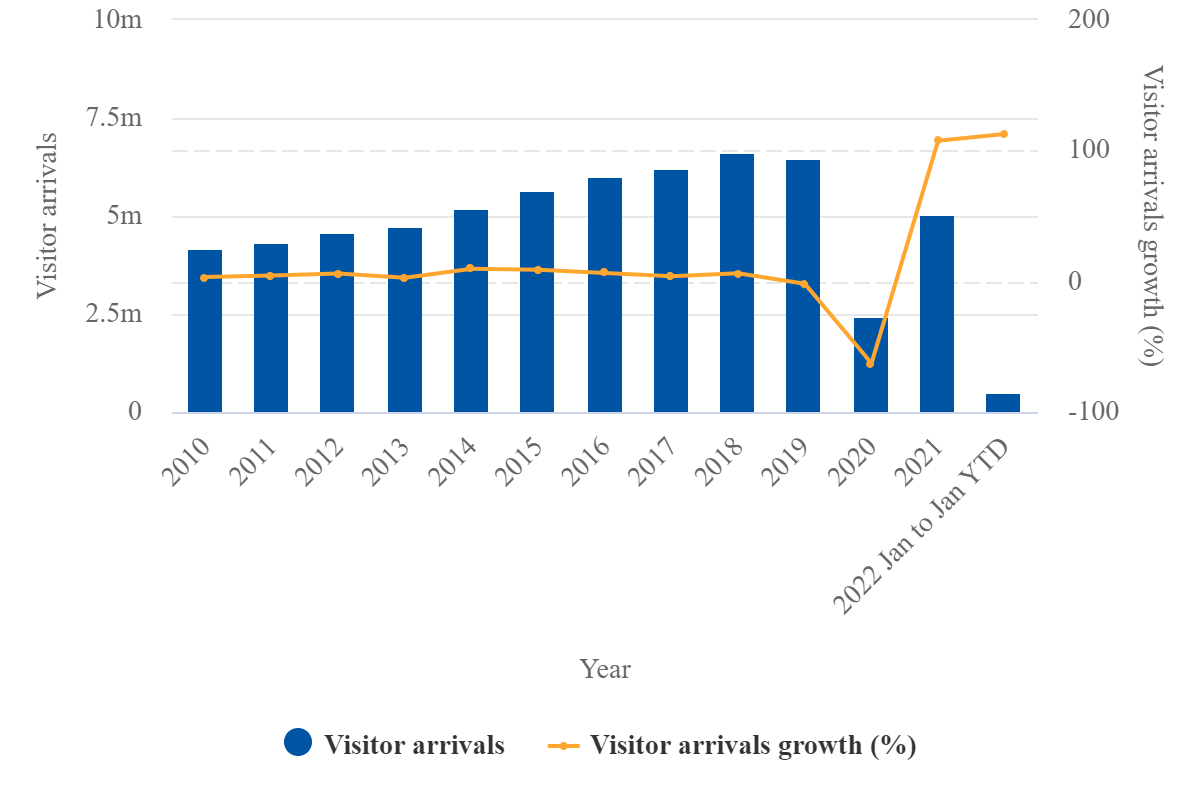 Part of the reason for the rapid return in the direction of the 2019 figure is that the Dominican Republic, in common with numerous other countries in the region, was a little more lax on entry requirements during the peak of the COVID-19 outbreak and was quick to abandon entry restrictions. From 08-Mar-2022 ‘COVID passports’ have not been required for entry from anywhere.

The majority of visitors come from the United States and the ratio has hardly varied over the past three years.

As COVID restrictions begin to be relaxed in the US, allied to the relaxation within the Dominican Republic, it will provide a strong boost to the Punta Cana airport’s prospects.

The chart below demonstrates how seat capacity, which has been running at 2019 levels since the beginning of the year, exceeded those levels from the end of Feb-2022 at Punta Cana. 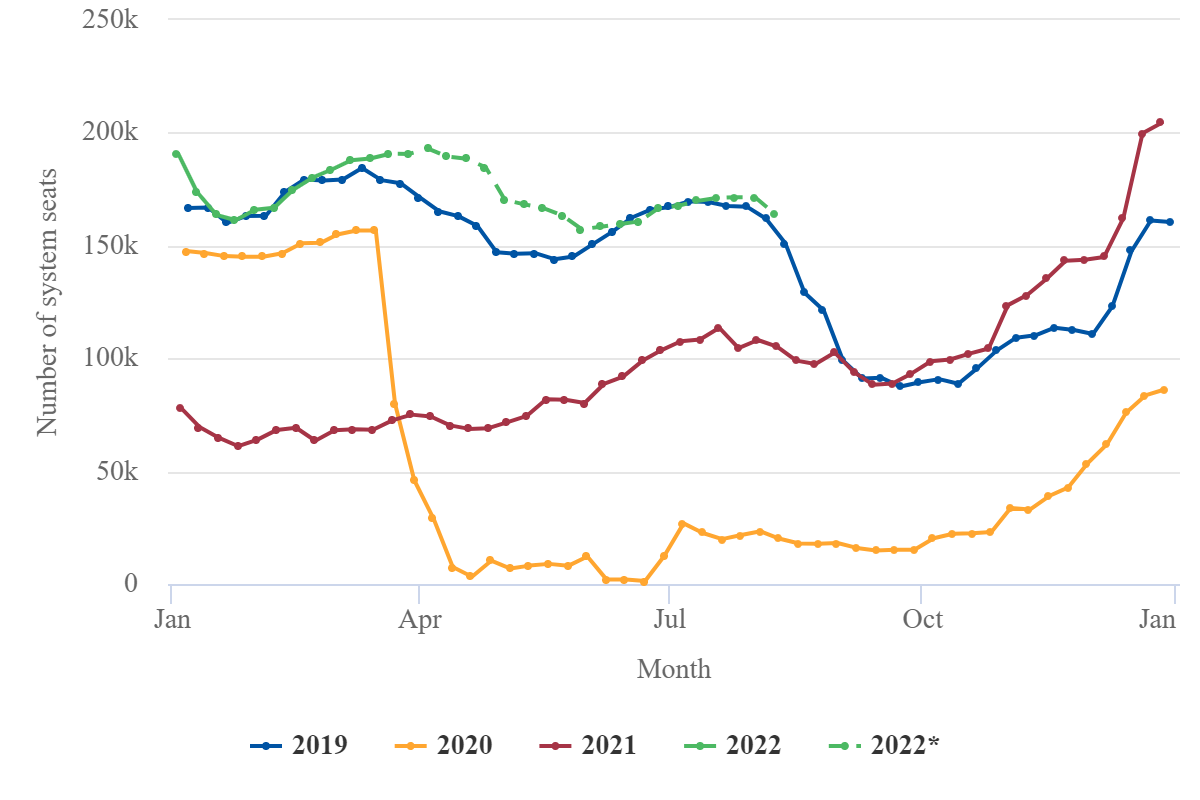 Capacity as measured by airline is again indicative of the importance of the North American market. The Dominican Republic does not need a flag carrier airline (Dominicana ceased business in 1999) when five of the top 10 airlines by that measure operating at Punta Cana are from the US and another three are Canadian.

As those markets return there is great promise for the resurgence of the tourism, on which the Punta Cana airport is based.

Moreover, at the airport there is a close to an ideal mix between full service, low cost and charter capacity, and between ‘unaligned’ carriers and those belonging to the three main alliances, which are equally represented.

For a country that is so closely tied to the sport of baseball (it has the second highest number of players by nationality in the US Major League), it can safely be said that with these expansion projects the Punta Cana airport has all bases covered.