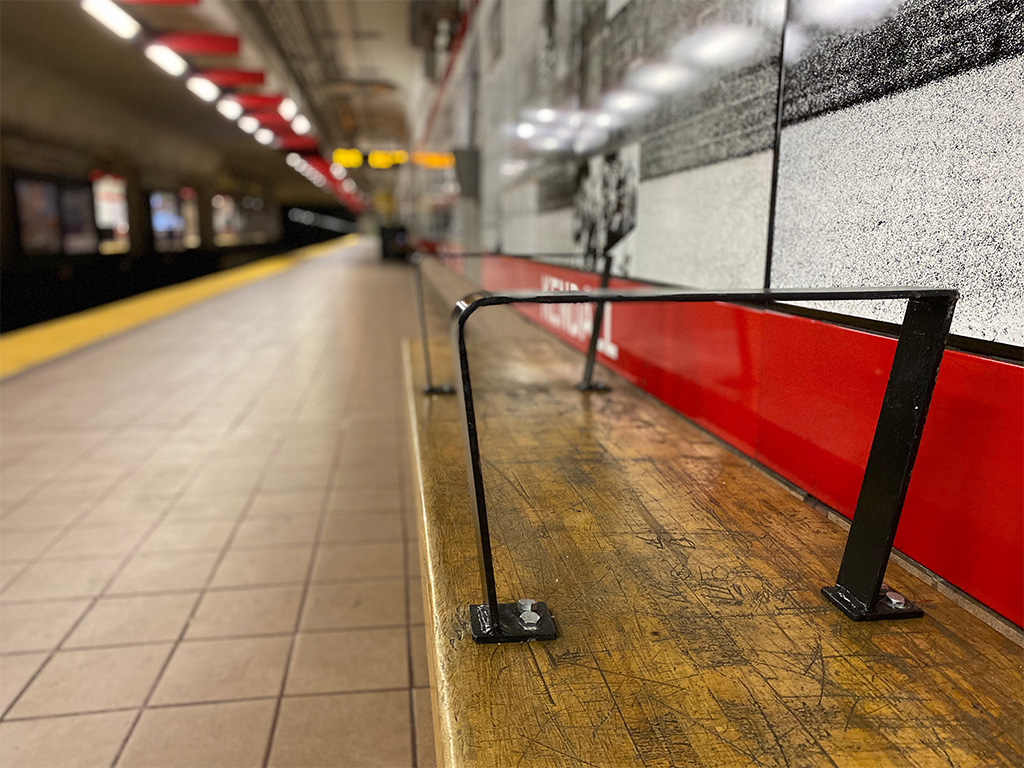 “Hostile architecture” like these MBTA armrests will be removed where possible from city-owned benches, according to a staff report to the City Council. (Photo: Marc Levy)

City Council, 5:30 p.m. Monday. No question, the big topic of the week is a request by councillor Paul Toner to stop the “quick build” of bike lanes through Porter Square and instead have the work be included with a longer stretch of Massachusetts Avenue. The order calls for construction after a median strip and overhead trolley wires are removed. Another by Toner wants those superfluous MBTA catenary wires gone as soon as possible, even if the city needs to do the removal alone – and makes bike-lane construction reliant on it. Mayor Sumbul Siddiqui sent a letter Thursday to agency general manager Steve Poftak urging “immediate arrangements” to take down the wires on Massachusetts Avenue between Roseland and Beech streets “to support critical bike improvements while we continue to work together” on clearing away the full catenary system.

There’s an order to get 205 Western Ave., the Cambridge Health Alliance’s former Riverside Health Center, in shape for use as a mental and behavioral youth and family health services facility run by the Cambridge Community Center. It could be good news for the CCC, which got zoning relief for the property back in 2019, though maybe a disappointment for a project called the Holistic Emergency Alternative Response Team that hoped to use the site for its own work. And former city councillor Craig Kelley returns with a petition for more “publicly accessible, privately owned” electric car charging stations, called the Transportation De-Carbonization and Congestion-Mitigation Bill.

The city manager will convey a request from the Planning Board on the matter of allowing multifamily housing in all zoning districts – namely that three discussions have come up with plenty of ideas, but there is a need for “specific policy objectives” to help refine them. Also, city staff have a response to councillors opposed to “hostile architecture” that’s used to keep people – specifically the unhoused – from getting comfortable in public: A survey of all 600-plus city-owned benches is underway to eliminate bars that are supposed to be armrests but serve little purpose except to be unwelcoming,

Jobs for the ‘Green New Deal’

Health & Environment Committee, 11 a.m. to 1 p.m. Tuesday. This committee run by city councillor Patty Nolan will talk about adding a section on “green jobs” to the municipal code, part of a Green New Deal for the city proposed by councillor Quinton Zondervan. The committee meets at City Hall, 795 Massachusetts Ave., Central Square. Televised and watchable by Zoom video conferencing.

School Committee, 6 p.m. Tuesday. This meeting sees a vote on an updated Title IX/Sexual Misconduct Policy for the district that follows years of high schoolers speaking out about “troubling levels of sexual harassment and assault.” The consent agenda includes a recommendation for non-participation in the state’s school choice program, which would mean declining students from outside the district for pay. (There’s also a special meeting at noon with a Massachusetts Association of School Committees training session on how to evaluate the superintendent of schools. It can be watched by Zoom.) The committee meets in the Dr. Henrietta S. Attles Meeting Room at Cambridge Rindge and Latin School, 459 Broadway, Mid-Cambridge. The 6 p.m. meeting is televised and watchable by Zoom video conferencing.

Rules of the of City Council

Overview of the Open Space Plan

Pedestrian Committee, 6 to 8 p.m. Thursday. Get a pedestrian’s view of the city’s Open Space Plan during an hourlong talk by Lev McCarthy and Gary Chan, neighborhood planners with the Community Development Department. Watchable by Zoom video conferencing.

Board of Zoning Appeal, 6:30 to 11:30 p.m. Thursday. North Charles, a non-medical counseling center for people with addiction issues, goes before the board for a vote that could determine its future in Cambridge. The center is at 54 Washburn Ave., in North Cambridge at the Somerville line, where some neighbors have opposed the presence of the facility and expressed concern about its patients. This isn’t the first time residents have tried to get North Charles removed, despite no record of its patients causing disruption or committing crimes in the neighborhood – and despite Cambridge priding itself on being a progressive community that fights for the disadvantaged, clinic officials say. Watchable by Zoom video conferencing.