More than 60 years after his death, Frank Lloyd Wright’s story remains relevant and arduously studied because of the great legacy he left to architecture. Considered the first truly American architect and the first superstar of his craft, Frank Lloyd Wright lives on through his buildings, his influence and his collective imagination. Surprisingly, more than half of Wright’s 1171 architectural works were never erected. 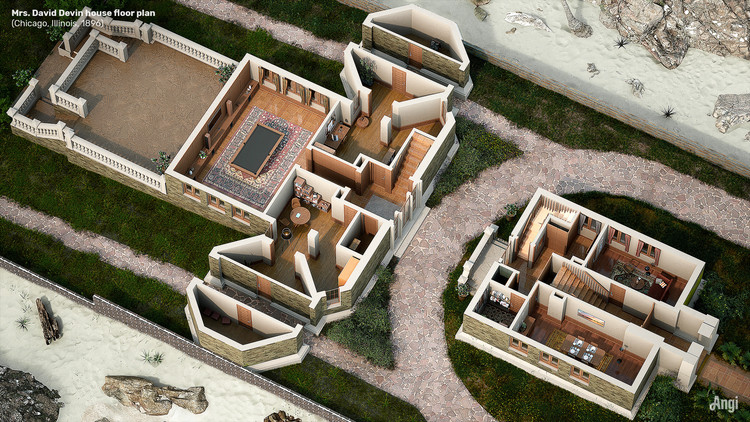 While unbuilt houses occasionally materialise on the American landscape, 660 of his building designs remain confined to paper, but what if the famous architect’s archives were studied to virtually erect some of these designs?

Wright’s plans and visualizations are things of beauty, but to experience how his unrealized sketches might feel requires a great leap. So, we chose three unbuilt Frank Lloyd Wright houses and brought them to life in realistic 3D renders and floor plans based on Wright’s drawings so you can get a glimpse of their beauty.
– Angi

Read on to explore these three projects.

“In the late 1890s, Wright was still setting out alone as an architect and didn’t have the clout to fight clients over details. His studio was part of his Oak Park home. This one-off experimental design is atypical of Wright’s works. Although Wright was toying with this type of curvy, Sullivanesque ornamentation around this time, the home doesn’t neatly fit his progression as an architect. Unbuilt, it leaves a unique hole in Wright’s history.”

“Rand had first contacted Wright in 1937, researching “the career of an architect” for a novel. The result was Howard Roark, the main character in ‘The Fountainhead’. Rand insisted that only Roark’s ideas and “the pattern of his career” were based on Wright, but many see a closer likeness. The building marries Rand’s severe streak with Wright’s celebration of nature. Concrete or stucco terraces thrust, cantilevered, from a softer fieldstone spine, and Wright’s addition of vines and fountains only accentuates the impression of a destroyer ship emerging from nature’s depths.”

“Wright’s Lake Tahoe Summer Colony was indeed a work of the imagination—designed, without a commission behind it, for an undeveloped 200-acre plot at Emerald Bay. And his lodge cottages for the site were prototypes, designed to adapt to the land once he could make a closer inspection. The mountainous site was nestled in woodland. High-walled terraces would further the sense of seclusion from society and attachment to nature. Wright’s truly utopian settlement would also have featured floating cabins in the bay below, accentuating the lodge buildings’ vertical accents.”