In May 2021, the 2021 AIA (Tasmanian Chapter) Enduring Architecture award was presented to Brian Walch of Hartley Wilson Oldmeadow Eastman Walch Architects, for the Wilson Robson Building in Liverpool Street Hobart.

The award was a milestone in the recognition of a unique period of Australian architecture. Completed in 1973, the building can be interpreted as representing both the high point but also the end of an exuberant era of Tasmanian architecture, in Hobart in particular, during the 1960s and early 1970s. During this time there was a mini explosion in the erection of high-quality buildings of all types and scales in concrete block – mostly standard greys. These were made locally by Besser Vibrapac Masonry at its Lutana factory established in the early 1950s on the edge of the city.

It may not be well known that the first large scale manufacture of ‘concrete blocks’, as they became known, was when the Besser Manufacturing Company in the USA developed a concrete block manufacturing machine (enabling standardised material composition and dimensional consistency) in 1904.

The blocks became increasingly popular immediately pre and post war and in Australia were made under license continuing the same name. In Tasmania (and elsewhere) they became known simply as Besser blocks.

Their Tasmanian success was based on a coalescence of contemporary forces. A post war immigrant boom of new skills, initiatives and labour was taking place accompanied by the emergence of a new pragmatic, ‘penthouse’*, climate sensitive ‘modern’ architecture.

Together with an explosion of a bewildering array of new mostly American inspired, appliances, this led inevitably to a corresponding search for new materials which were affordable, easy to install and minimal maintenance.

In Hobart there also arose new and expanding major industries and users of cost-effective building designs and products, capitalising on the State’s low-cost power, abundant water, and cheap labour.

Companies such as the ‘Hydro’ (Hydro Electric commission), The Electrolytic Zinc Works, Cadbury’s and Silk and Textiles were industrial complexes also carving out new sites and commercial zones. 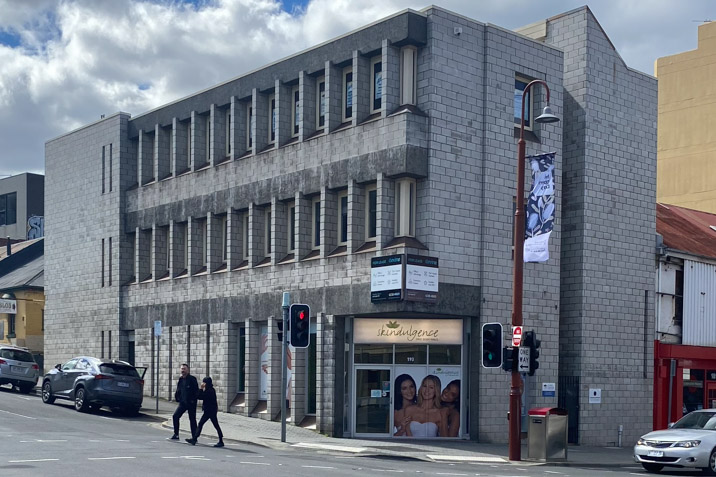 These factors supported the successful establishment of ‘Besser’ in Tasmania. Besser blocks offered excellent value for money, were readily adaptable and came in many sizes, profiles, colours, and textures.

Self-finished and suitable for both internal and external use they were quick to lay being four times the surface area of a brick. Indestructible, they required minimal maintenance*. They were also enthusiastically peddled to the local architectural- construction community, where, typical of the culture of a smaller provincial town, the company’s sales personnel were hands-on, experienced, and knowledgeable promoters of their product.

The standard block was a rectangular prism, the lightest being 390mm x 190mm x 90mm wide with two large core holes allowing for reinforcing steel and concrete core filling. With their uncompromising industrial appearance, Besser blocks were initially popular on a range of similarly utilitarian building types such as retaining walls, bridge abutments and light industrial ‘sheds’ for both urban and farm usage.

Structures where the robust nature of the product, speed of erection, self-finish and cost were the predominant selection criteria – aesthetics being a second order of importance. Being double the length of a brick they were also easier to maintain in alignment making them handyperson friendly which promoted their informal use by casual labour. They were used in a small church in Goodwood designed to be erected by ‘men of the parish.’

Later, as the factory’s production capacity increased, delivery methods were streamlined, and the public became familiar with the grey block’s appearance, they attracted wider attention. Architects, builders, their clients, and public agencies such as the HEC (Hydro-Electric Commission) and PWD (Public Works Department), began to use the new product on a range of more complex and sophisticated public and industrial buildings.

In their rapid take up across Tasmania, besser blocks were becoming ubiquitous: rivalling the 19-century use of sandstone in their familiarity as an all-purpose ‘all seasons’ material.

In the late 1950s, having been adopted by government for low-cost council housing, including in Goodwood and Risdon, their use for private residences became inevitable. Initially for private but remote buildings, such as farmhouse extensions and similar, and later in Hobart where a breakthrough moment was the construction of a private residence in Besser block by the architect Lew Parkes for his family in Sandy Bay in 1958.

Parkes was a Sydney emigre trained at the University of Sydney School of Architecture, who had relocated with his family to Hobart in 1949. With his new business partners Pat Bush and Garf Haslock (already in partnership) they quickly established a reputation for their revolutionary ‘modern,’ unadorned, open planned, ‘horizontal’ houses: which were also highly cost effective.

These buildings exhibited the hallmarks of a novel modern style utilising a vocabulary of flat or skillion roofs, self-finished face grey blockwork internally and externally (occasionally coloured or painted), and painted timber framed floor to ceiling window- walls which were load bearing.

In a robust simple aesthetic and minimally detailed they explored the possibilities of new inexpensive materials including concrete block and off-form concrete. It heralded a simplified philosophy of expression derived from the new typologies and lifestyle changes taking place. 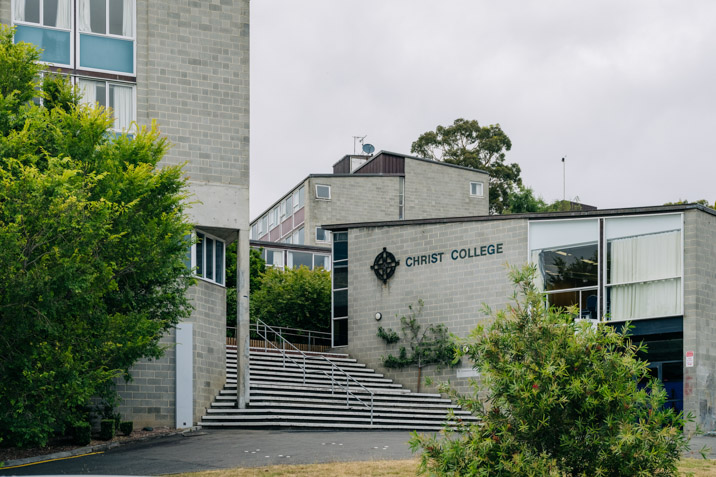 Another local influence on Hobart, which reinforced the popularity of Besser Blocks during the early 1960s, was the influence of two architects, both newcomers to practice in Hobart: Dirk Bolt and Jim Moon. They were exceptionally talented and European trained.

Bolt was an emigre from Groningen in Holland inspired by the Dutch ‘modernists’, particularly Willem Dudok for his use of brickwork and his later high rise ‘curtain wall’ experiments. Moon had lived and worked for a time in Copenhagen, following graduation from Hobart Technical College, returning to Hobart in 1955.

They brought to Tasmania the European experience of an industry with an historically far greater range of masonry products of diverse types, dimensions, materials and importantly a vast array of laying techniques.

They both eagerly embraced Hobart’s ‘new’ concrete blocks, by now well established. Bolt in part through the sheer volume of high-profile projects designed by his own firm, Hartley Wilson, and Bolt. Moon through his personal work and his influence on his business partners at his new firm Bush Haslock Parkes Shugg and Moon (now BPSM). Three of whom including partner Bill Shugg and himself, were to design their own family homes in grey concrete blocks.

Other architects of note whose work in the late 60s and early 70s also redefined key city precincts were Michael Viney (from Philp Lighton Floyd and Beattie) and Brian Walch. As well as his own Taroona house, Walch designed important grey block houses for two local artists, Tim Waller, and Blair Gamble.

Viney designed a suite of buildings in Montpelier Retreat, Battery Point, where earlier, developers had demolished several Hobart’s most iconic row houses. In concrete block and off form concrete in brutalist manner, the heavily accented vertical structure with recessed spandrels and sun protected glazing and later buildings flush to the street is all still extant, although in part now garishly painted.

In late 1963, Bolt’s departure for Canberra was a watershed moment. Bringing an end to a short but illustrious career in Hobart he left a legacy of some of the most significant early post war buildings in Tasmania, if not the country*.

These included a range of specialist community buildings such as Christ College, adjacent the University of Tasmania’s Sandy Bay campus, and the Long Beach bathing pavilion – both utilising concrete block and both now heritage recognised.

The Scottish Union building – an 8-story office building in the city – and a research and development building at the EZ company in Risdon, were also designed by Bolt. 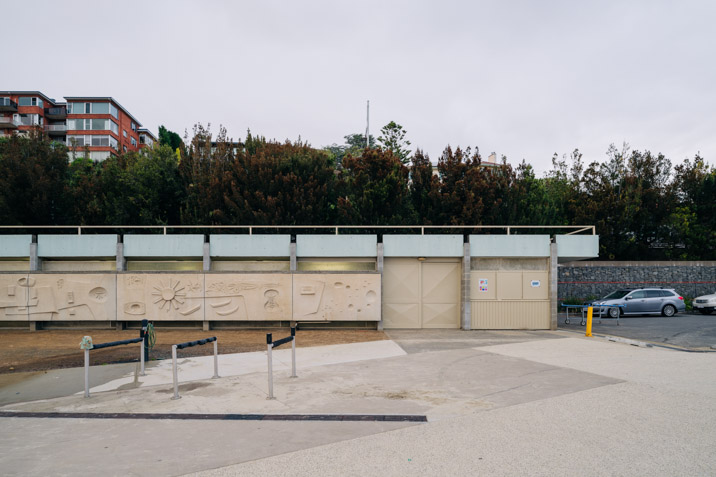 Moon’s concrete block work, less flamboyant than Bolt’s and influenced by his Scandinavian experience, included several industrial buildings and his own house completed in 1962. Bornholm, named after an island off the coast of Denmark where he and his wife had holidayed, was awarded the 2019 AIA (Tas chapter) Enduring Architecture award.

Another Moon house in grey blockwork was the Dr. Charles Shugg house at Lindisfarne in 1962.

Besser concrete blocks were heavy, and as a result difficult to handle – even the smallest standard 90mm wide hollow block weighed ten kilos. Combined with a public perception of the grey blocks’ uncompromising ‘ugly’ industrial appearance, it could be contended that the increasing awareness of OH&S in the building industry combined with a more unionised workforce and an emerging community focus on health and safety led to the decline in their popularity.

By the mid 1970s, this isolated, influential, and challenging era of Australian architecture, perpetrated in one of its then far-flung outposts, was coming to an end, coinciding as it happened with the completion of the Wilson Robson building.

*An ancient term derived from early courtyard sports in which spectators were housed in a low-pitched skillion roofed gallery.
*Possible issues with efflorescence
*Unfortunately now painted due to window detailing issues.
*Christ College is listed amongst the top 50 significant buildings in a 2000, Australia- wide survey of 20th century architecture for the AIA

Tim Hurburgh is a Director of H2o architects and former chair of Bates Smart. He grew up and was educated in Hobart. Tim won a 1966 Besser display house competition, which inspired his own early use of Besser blocks and, later, this article.

Nicholas Heyward is a historian and current chair of the National Trust of Tasmania.