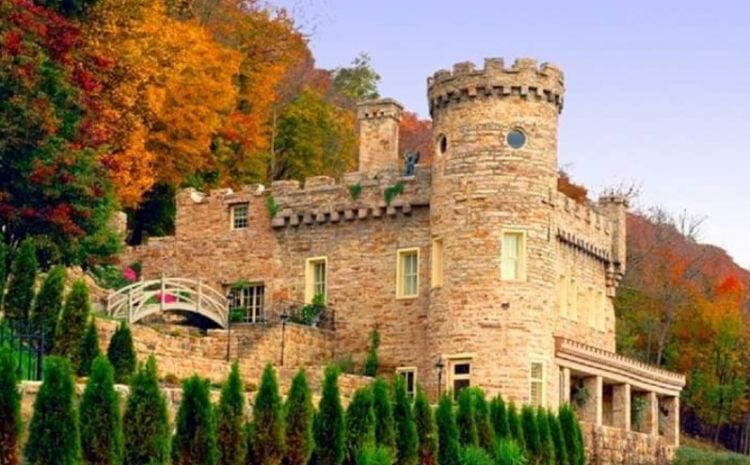 The Berkeley Springs Castle was built between 1885 and early 1890s by a prominent business trader Samuel Taylor Suit as a wedding gift promise to his new wife, Rosa Pelham. This 19th-century iconic structure is beautiful and is well maintained. A day’s visit around this facility will feel like heaven as you enjoy a breath of fresh air that will make you forget your life problems. This article is a guide on ten things you didn’t know about Berkeley Springs Castle West Virginia.

The architect behind this magnificent building was Alfred. B. Mullet, renowned all over Washington, D.C, for some superb building designs like the U.S. State Department Building, the Old San Francisco Mint, the old New York Post Office, and the U.S. Treasury Building. There are reports that the idea of the castle design came when he was having dinner at Berkeley Spring Hotel, and he started to sketch the castle design on a table cloth or hotel menu. The laying of the building foundation began in 1885 after the blueprint was completed. The design resembles the English-Norman widely architectural style used in the late 1800s.

Before the civil war began when this castle was being constructed, over 100 German masons were contracted to work on the Berkeley Springs Castle original design until they completed their work in 1891. The building was done using sandstone cut by hand in the surrounding area transported to the construction site using horses and wagons.

Berkeley Springs Castle is located in West Virginia. It is one of the artificial attractions where one can enjoy the road in the city as they admire its beautiful layout. The architect ensured that the completion piece was jaw-dropping. A beautiful park and excellent hotels surround it.

5. Berkeley Spring was built for Love

When Colonel Samuel Taylor met Rosa Pelham at one of the Berkeley Springs Hotel, she mentioned that her dream was to live in a castle before she died. The colonel promised to build one for her if she agreed to marry him. According to DestiMap, she obliged, and they tied the knot. To fulfill his promise to his wife, the colonel hired architect Snowden to begin the work of this fantastic castle that has become the attraction of West Virginia.

After Rosa, who owned the castle for a long time started having money issues and could no longer keep her debt ratio at a minimum, she started to sell large parts of the land around the castle. The castle had to be sold in 1913 at a public auction, forcing Rosa to retire and move to a small house where she began rearing chickens before moving to Idaho. According to TheClio, the first new owner after Rosa was George Cunningham, who was a businessman in the area. Cunningham’s initial plan was to turn the castle into a hotel. He didn’t actualize that plan but instead turned the castle to hold dances, shops, balls, and a retreat center for the artist. In the 1930s, the castle was acquired by Ward Kesecker and used as an antique site and hobby fairs. He also used the castle as a Boy’s Camp. The longest stint was Walter Bird which lasted from 1954 until 2002. During his ownership, Walter turned the castle into a tourist center. In 2002, Berkeley Springs Castle became a new home to Andrew Gosline, who came from Florida to visit it and acquired it. He owned the castle until his demise in 2014. The castle was placed for sale again in 2018 before it was bought in 2020. In June 2020, it was acquired by a non-profit organization called VDARE Foundation for $1.4 million.

The West Virginia castle has a rich history that includes many remarkable records. According to Berkeley Springs.com, this castle has been an attraction for tourists ever since it was constructed for more than 120 years now. When Walter Bird acquired it back in 1954, He told many historical tales to the people who visited the castles in groups and as individuals. The castle’s rich history made the National Register of Historic Places classify it as a historic site.

8. It took about Six Years for the castle to be completed

When building work began, it took the German masons and architect Snowden Ashford six years to actualize the design of Alfred B. Mullet on the 9,300 squares feet piece of land. The construction work ended in 1891. After which Rosa moved in with her three kids.

9. The castle has been a Tourist Attraction in the Region

The castle’s site is enough to attract tourists in West Virginia. Many people visit the place to escape from their area’s miserable summer weather. The clear, cool air from the mountain is perfect for relaxation. The warm mineral springs are remarkable and unforgettable. Visitors have been entertained with lavish parties, the best music bands, and a tour guide inside the castle for many years before it became private.

10. It is believed that the castle has Ghosts

Berkeley Spring Castle is believed to be one of the castles with ghost experiences. According to West Virginia Executive, visitors who have gone to the castle, as well as the castle employees, have reported instances of encountering four different spirits. Most of them narrate that these spirits make loud noises when you go upstairs. Sometimes they rearrange the furniture in the rooms. Some visitors have explained seeing unexplained images on the walls, mirrors, and mysterious other pictures in the castle. Berkeley Springs Castle represents a combination of wilderness and refinement, which according to most Americans, is a twin beauty, showcasing natural resources and American culture reflection. If you love unique attractions, this castle is where to take a roadside trip to watch. You will create beautiful memories from this fairy tale place.